watch 01:56
The Loop (Movies)
Do you like this video?
Play Sound
Halloween II 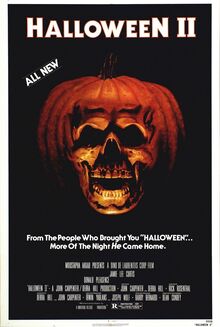 Halloween II is a 1981 American slasher horror film directed by Rick Rosenthal, and written and produced by John Carpenter and Debra Hill. It is the second installment in the Halloween series and is a direct sequel to Carpenter's Halloween, immediately picking up where it had left off. Set on the same night of October 31, 1978 as the seemingly unkillable Michael Myers continues to follow Laurie Strode (Jamie Lee Curtis) to a nearby hospital while Dr. Sam Loomis (Donald Pleasence) is still in pursuit of his patient.

Stylistically, Halloween II reproduces certain key elements that made the original Halloween a success, such as first-person camera perspectives and unexceptional settings. The sequel was a box office success, grossing over $25.5 million in the United States.

Originally, Halloween II was intended to be the last chapter of the Halloween series to revolve around Michael Myers and Haddonfield, but after the lackluster reaction to Halloween III: Season of the Witch (1982), the Michael Myers character was brought back six years later in Halloween 4: The Return of Michael Myers (1988).

On October 31, 1978, picking up immediately after the first film, Laurie Strode (Jamie Lee Curtis) is rushed to the hospital after being attacked by Michael Myers (Dick Warlock), who disappeared after being shot six times and falling from a second story balcony. Dr. Loomis (Donald Pleasence) attempts to track down Michael. After escaping, Michael steals a butcher knife from a house and kills a girl as he seeks shelter to recover from his injuries. He later learns of Laurie's location from a radio broadcast and makes his way to Haddonfield Memorial Hospital. Laurie begins having flashbacks of being adopted by the Strodes and visiting a young boy in a mental institution. However, her sedation leaves her in a semi-conscious state most of the time. Her friend Jimmy Lloyd (Lance Guest) begins to worry about her, developing romantic feelings for her, despite the chagrin of the head nurse Mrs. Alves (Gloria Gifford), who is trying to get Laurie to rest comfortably. Dr. Loomis and Sheriff Brackett (Charles Cyphers) continue to search for Michael, only for an oncoming speeding police car to accidentally hit and kill Ben Tramer (who was wearing a mask similar to Michael's), in the process.

Upon arriving at the hospital, Michael cuts the phone lines and kills anyone who stands in his way of getting to Laurie. He kills security guard Mr. Garrett (Cliff Emmich) with a hammer claw to the skull. He then strangles ambulance driver Budd Scarlotti (Leo Rossi) and drowns nurse Karen Bailey (Pamela Susan Shoop) in a scalding hot tub. Orderly Janet Marshall (Ana Alicia) notices that Laurie is reacting strangely to her medication, and goes to alert the main attendant of the hospital, Dr. Frederick Mixter (Ford Rainey). She rushes through his office, only to find his corpse with a needle sticking out of his eye. Before she can run away, Michael appears behind her and murders her as well by injecting air into her temple, causing an embolism. Laurie attempts to flee before Michael can find her. While searching the hospital, Jimmy eventually discovers Mrs. Alves strapped to a table in one of the surgery rooms, her blood having been drained. While trying to hurry out of the room, Jimmy slips, falls, and is knocked unconscious.

Meanwhile, Dr. Loomis follows clues connecting Michael to Samhain and the occult, which provides a possible explanation for his seeming indestructibility. Loomis is interrupted by his colleague Marion Chambers (Nancy Stephens), a nurse from the mental institution, and a U.S. Marshal, who reveals he has been ordered to have Loomis returned to the hospital under the enforcement of the Illinois governor's office. En route, Marion tells Loomis that Laurie Strode is Michael's younger sister. Upon realizing that Laurie is Michael's target, Loomis forcibly orders the Marshal (John Zenda) to turn around and bring him back to Laurie.

Meanwhile, nurse Jill Franco (Tawny Moyer) is killed while searching for Laurie when Michael stabs her in the back with a scalpel. Laurie narrowly escapes by going through the boiler room and up to the parking lot outside, discovering Mr. Garrett's body along the way. She is unable to start any cars and also notices that all of the tires have been flattened. Jimmy eventually makes it out of the hospital and out to his car to seek help, but faints and falls unconscious again, this time on the steering wheel horn which sounds and alerts Michael of their position. Loomis, Marion, and the Marshal arrive and just barely save Laurie from being killed by Michael in the parking lot. Marion goes to the police car to call for help, after which Michael slits the Marshal's throat. Loomis and Laurie flee into the operating rooms. Michael stabs Loomis in the stomach, wounding him, and Laurie shoots out both of Michael's eyes, causing him to blindly swing at them. Loomis fills the room with ether and oxygen gas using the distraction to allow Laurie to escape. Loomis then ignites the gas, blowing up the surgery room in the process and evidently immolating them both in the fire.

At daybreak, Laurie is loaded onto an ambulance, having visions of Michael's burning body as she is driven off to safety. In an alternate ending, Laurie sees a familiar shape sit up on the stretcher beside her in the ambulance, which turns out to be Jimmy. The two hold hands and Laurie proclaims "We made it!"

Carpenter and Hill, the writers of the first Halloween, had originally considered setting the sequel a few years after the events of Halloween. They planned to have Myers track Laurie Strode to her new home in a high-rise apartment building. However, the setting was later changed to Haddonfield Hospital in script meetings.

Halloween executive producers Irwin Yablans and Moustapha Akkad invested heavily in the sequel, boasting a much larger budget than its predecessor: $2.5 million (compared to only $320,000 for the original) even though Carpenter refused to direct. Most of the film was shot at Morningside Hospital in Los Angeles, California, and Pasadena Community Hospital in Pasadena, California. There was discussion of filming Halloween II in 3-D; Hill said, "We investigated a number of 3-D processes ... but they were far too expensive for this particular project. Also, most of the projects we do involve a lot of night shooting—evil lurks at night. It's hard to do that in 3-D."

The sequel was intended to conclude the story of Michael Myers and Laurie Strode. The third film, Halloween III: Season of the Witch, released a year later, contained a plot that deviated wholly from that of the first two films. Tommy Lee Wallace, the director of Halloween III, stated "It is our intention to create an anthology out of the series, sort of along the lines of Night Gallery, or The Twilight Zone, only on a much larger scale, of course." When asked, in a 1982 interview, what happened to Myers and Loomis, Carpenter flatly answered, "The Shape is dead. Pleasence's character is dead, too, unfortunately." Neither Carpenter nor Hill were involved in the later sequels that featured Michael Myers again.

Carpenter composed and performed the score with Alan Howarth, who had previously been involved in Star Trek: The Motion Picture (1979), and worked with Carpenter on several projects including Escape from New York (1981), Halloween III: Season of the Witch (1982), Christine (1983), and Prince of Darkness (1987). The film's score was a variation of Carpenter compositions from Halloween, particularly the main theme's familiar piano melody played in a compound 5/4 time rhythm. The score was performed on a synthesizer organ rather than a piano. One reviewer for the BBC described the revised score as having "a more gothic feel." The reviewer asserted that it "doesn't sound quite as good as the original piece", but "it still remains a classic piece of music."

Many fans have provided theories saying that Jimmy might be the husband of Laurie and the father of Jamie Lloyd, Laurie's orphaned daughter from Halloween 4: The Return of Michael Myers, Halloween 5: The Revenge of Michael Myers and Halloween: The Curse of Michael Myers. Jamie's father appeared in a photo in Halloween 4: The Return of Michael Myers. In this photograph, he did not resemble Jimmy (although the person in the photograph could have possibly been her uncle, Jimmy's younger brother Ziggy who was mentioned in the film), but fans continued to theorize whether or not Jimmy is Jamie's father. There was another theory about Jimmy being the father of John Tate, Laurie's son from Halloween H20: 20 Years Later, but this was revealed to be false when he was killed off in an issue of The First Death of Laurie Strode, a comic book series based on the H20 timeline-continuity.

Critical reaction to the film was very mixed. It has a 29% "rotten" rating at Rotten Tomatoes among 34 reviews. While film critics had largely showered praise on Halloween, most reviews of its sequel compared it with the original and found it wanting. Roger Ebert of the Chicago Sun-Times wrote that Halloween II represented "a fall from greatness" that "doesn't even attempt to do justice to the original." He also commented, "Instead, it tries to outdo all the other violent Halloween rip-offs of the last several years."

Retrieved from "https://movies.fandom.com/wiki/Halloween_II_(1981)?oldid=208976"
Community content is available under CC-BY-SA unless otherwise noted.