Start a Wiki
watch 01:48
The Loop (Movies)
Do you like this video?
Hamburger Hill 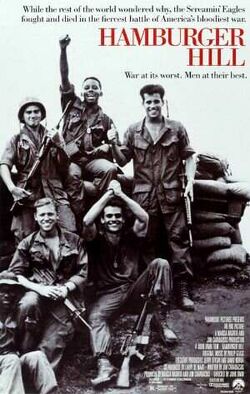 Hamburger Hill is a 1987 film directed by John Irvin. The film is an interpretation of the Battle for Hill 937.

Soldiers in the 101st Airborne are sent to occupy an enemy hill called hill 937 (Later Hamburger Hill). The battle for the hill was dubbed one of the bloodiest battles of the Vietnam War. The film portrays fighting, combat, courage, camaraderie and dedication to the mission among troops.

Retrieved from "https://movies.fandom.com/wiki/Hamburger_Hill?oldid=101367"
Community content is available under CC-BY-SA unless otherwise noted.