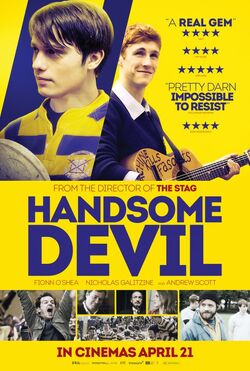 Handsome Devil is a 2016 Irish comedy-drama film directed by John Butler. It was screened in the Contemporary World Cinema section at the 2016 Toronto International Film Festival.

It centres on an ostracised teenager (Fionn O'Shea) at a rugby-obsessed all boys boarding school in Ireland whose new roommate (Nicholas Galitzine) is the school's new rugby star-player. The two form an unlikely friendship until it is tested by those around them. Handsome Devil has received critical acclaim, winning the award for Best Irish Feature of 2017 from the Dublin Film Critics' Circle; four nominations at the 2018 Irish Film and Television Academy (IFTA) Awards, including Best Feature Film; and the Best Single Drama Award at the annual Celtic Media Festival in 2018.

On review aggregator Rotten Tomatoes, the film holds an approval rating of 83% based on 42 reviews, with an average rating of 6.5/10. The website's critical consensus reads, "Handsome Devil offers a charming, well-acted variation on the coming-of-age story with a few fresh topical twists." Metacritic gives the film a weighted average rating of 60 out of 100, based on 6 critics, indicating "mixed or average reviews".