watch 01:20
The Loop (Movies)
Do you like this video?
Hangin' with the Homeboys 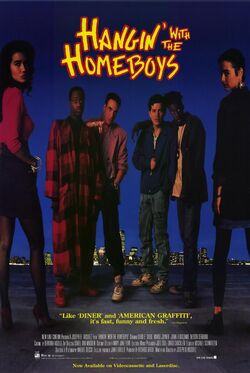 Hangin' with the Homeboys is a 1991 American coming-of-age comedy-drama film directed by Joseph B. Vasquez.

It first premiered at the Sundance Film Festival in 1991 where Vasquez won the Waldo Salt Screenwriting Award.

When the four of them go out for a guys' night out, they end up in separate situations which leaves their friendships strained.

Joseph B. Vasquez wrote the script in three days and originally wrote the part of Vinny for himself to play, but the role ended up going to Nestor Serrano.

The film was shot in dangerous areas of the South Bronx. The neighborhood residents were hired to look out for potentially dangerous people approaching the filming & some of the scenes were disrupted by people throwing things and yelling at the actors.

Chris Rock was considered for the part of Willie, but the part was given to Doug E. Doug.

During the production of the film, Vasquez was attacked on the way to the set, his face slashed by a homeless man. According to an interview with Nestor Serrano, when Vasquez returned to work after recuperating, he was angry and "intolerable" & often fought with the cast and crew.

A sequel titled "Hangin' With the Homegirls" was planned, but it never materialized.

On Rotten Tomatoes, "Hangin' with the Homeboys" has a rating of 83% based on 6 reviews.

Roger Ebert gave the film a three star rating, saying that the film "adopts a loose, improvisational style as the homeboys try to crash a party, cruise the streets of Manhattan looking for action, pick up a couple of girls, and begin to realize that their entire lives could be as aimless as this night - unless they get organized."

Retrieved from "https://movies.fandom.com/wiki/Hangin%27_with_the_Homeboys?oldid=232682"
Community content is available under CC-BY-SA unless otherwise noted.