Start a Wiki
watch 16:45
The Loop (Movies)
Do you like this video?
Hansel and Gretel: Witch Hunters 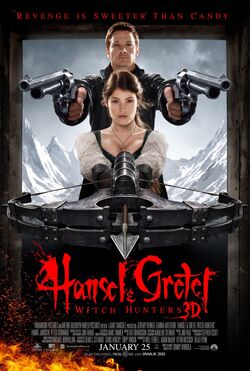 Hansel and Gretel: Witch Hunters is an American action comedy horror film directed by Tommy Wirkola, to be released in January 2013. The film will be made in 3-D. It is a continuation to the fairy tale Hansel and Gretel by the Brothers Grimm.

Catching up with Hansel and Gretel, fifteen years after the traumatic incident involving a gingerbread house, the siblings have grown into vengeful bounty hunters dedicated to exterminating witches. Over the years, the siblings became expert hunters, famous for their proficiency at tracking and taking down their prey. Although still recovering from their ordeal, their work is relatively easy as for an unknown reason harmful spells and curses do not work well against them. The Mayor of Augsburg recruits them to rid the town and nearby forests of an evil sorceress who is planning to sacrifice many local children at the witches' gathering during the upcoming 'Blood Moon' night in two days time. To make things worse, the duo also has to deal with the brutal Sheriff Berringer who has taken power in Augsburg and conducts a very indiscriminate witch-hunt of his own.

According to a 2009 interview with Wirkola, "it's an action-adventure horror movie that finds Hansel and Gretel fifteen years after their first witch incident and they've grown up to become merciless witch hunters. Blood and gore and action, all the stuff that I love. It's definitely an R-rated movie, the first draft has a lot of blood and guts. First and foremost, it's an action movie, I think, with horror elements. And of course some dark humor as well. But the action and horror are the most import feelings I want." According to Adam McKay in 2010, "the idea is, they’ve grown up and they hunt witches. It’s a hybrid sort of old-timey feeling, yet there’s pump-action shotguns. Modern technology but in an old style. We heard it and we were just like, ‘That’s a freakin’ franchise! You could make three of those!'" McKey added, "the witches are awesome in it. Nasty, mean witches, and we'll get some great actresses for them as well."

Filming began in March 2011 and is taking place in Potsdam Babelsberg and in the city of Braunschweig, Germany. On December 3, 2011, Entertainment Weekly released the first publicity photo of the film. Initially slated for a March 2, 2012 release, Paramount Pictures pushed it to a ten month delay for January 11, 2013. The first trailer for the film was released on September 5, 2012. The film was then delayed by two weeks to January 25, 2013 to avoid competition with Gangster Squad.

Behind the Scenes Photos

Retrieved from "https://movies.fandom.com/wiki/Hansel_and_Gretel:_Witch_Hunters?oldid=189444"
Community content is available under CC-BY-SA unless otherwise noted.