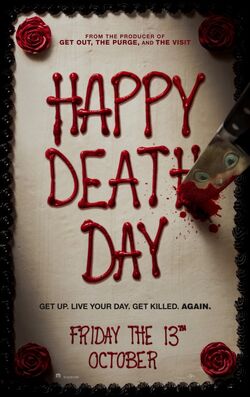 Theresa "Tree" Gelbman wakes up on her birthday in the dorm room of classmate Carter Davis after a drunken binge the previous evening. Tree ignores her father's calls, dismisses Carter as she leaves his room, throws away a birthday cupcake given to her by her roommate Lori Spengler, and has an affair with her married professor, Gregory Butler. That night, on her way to a party, Tree is lured into a tunnel and murdered by a hooded figure wearing a mask of the campus mascot.

Tree wakes up the next morning in Carter's bed with the previous day's events repeating. Unnerved, she relives the day and avoids the tunnel, instead heading to a fraternity house for a surprise party. However, the masked killer follows her to the party and kills her again. Tree realizes that she is in a time loop and tries to avoid her death by barricading herself in her room, but the killer hides in her room and kills her again.

Upon waking up, she relays her story to Carter, who suggests that she take advantage of the loop to identify her killer. She spends the next several iterations trailing suspected classmates and getting killed each time. After a loop where she is bludgeoned, she faints shortly after waking up. She awakens in the campus hospital where she learns that her body shows evidence of recovery from multiple traumatic injuries, indicating that she has retained physical damage from her previous deaths. Shortly after escaping the hospital, she is pursued and killed again.

Waking up in Carter's bed again, Tree convinces Carter of her predicament by showing that she holds knowledge of the day's events. Tree tells him that she hates who she has become since distancing from her father after her mother's death. Later, Tree sees a local news report on John Tombs, a serial killer being held at the campus hospital. Concluding that Tombs is her killer, Tree rushes to the hospital to warn of his escape. Tombs breaks free and nearly kills Tree, but Carter follows and rescues her. Tombs kills Carter before chasing Tree to a nearby bell tower where she manages to subdue him with a crowbar. Realizing that Carter will remain dead if she ends the loop, Tree hangs herself.

Believing she has solved her murder, Tree is happier and more relaxed during the next loop. Tree ends her affair with Butler and meets with her father. That night, she goes to the hospital and attacks and kills Tombs. Relieved to finally be free, she celebrates her birthday in Carter's room and eats the cupcake given to her by Lori.

Tree wakes up in another loop. Confused and angry that the time loop continued after she killed Tombs, Tree returns to her room where Lori offers the cupcake again. Tree realizes this was the only time she had ever eaten the cupcake and died in her sleep. Tree deduces that Lori is the true killer; Lori had poisoned the cupcake, but when Tree declined to eat it, she utilized her job as a nurse in the hospital to drug and frame Tombs for Tree's murder. Tree tries to coerce Lori to have a bite, however when Lori refuses, Tree decides to take the cupcake to the police. Lori lunges at Tree, locks the door and confesses that she was jealous of Tree's affair with Butler, before engaging in a fight. Tree manages to stuff the cupcake in Lori's mouth before kicking her out of a window, sending her falling to her death.

Tree and Carter muse over the day's events in a restaurant. He offers her his room for the night, and Tree wakes up the next day believing herself to be in another loop. Carter reveals it to be a prank, and the two kiss.

A sequel to the film was released on February 13, 2019, titled Happy Death Day 2U. Many actors from the original film reprised their role in the follow-up, and it was once again directed by Christopher Landon, who additionally served as screenwriter for the film, replacing Scott Lobdell who penned the script for the original.