Start a Wiki
watch 01:27
The Loop (Movies)
Do you like this video?
Happy Death Day 2U 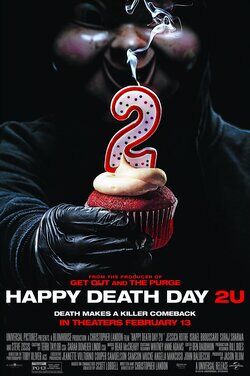 Happy Death Day 2U is a 2019 American horror film directed by Christopher Landon. It serves as the sequel to the 2017 film Happy Death Day. Jessica Rothe reprised her role as Tree Gelbman and Israel Broussard also reprised his role as Carter Davis, amongst many other actors from the original film who returned from the sequel. In addition, the film stars Suraj Sharma and Sarah Yarkin.

It was released by Universal Pictures on February 13, 2019, in the United States. The film was originally scheduled to be released the following day, but was changed at the request of a relative of a victim of the Stoneman Douglas High School shooting, which happened exactly one year prior.

College student Ryan Phan wakes up in his car on Tuesday, September 19. Returning to his dorm room, he walks in on his roommate Carter Davis and his girlfriend Tree Gelbman. He resumes work on an experimental quantum reactor with fellow students Samar Ghosh and Dre Morgan. After Bronson, the school dean, shuts down the project for triggering several power outages, Ryan is murdered by someone dressed as Babyface, and wakes up again on Tuesday the 19th. Tree explains her experience reliving Monday the 18th, and she and Carter agree to help Ryan. They learn the reactor was responsible for creating the new loop. The new Babyface tracks Ryan down, but Tree subdues and unmasks him to reveal another Ryan. The second Ryan warns that the original must die for the loop to close. Terrified, Ryan activates the reactor, releasing a powerful energy pulse.

Tree wakes up in Carter's room on Monday the 18th, and relives her original time loop anew, with certain differences: Lori Spengler is not the Babyface killer, and Carter is now dating Danielle Bouseman. Ryan theorizes that the reactor caused Tree to drift into another dimension. When Tree learns her mother Julie is still alive in this new reality, she decides to stay.

That night, Tree goes to the hospital to intercept serial killer John Tombs before he escapes, but is confronted by a police officer before Babyface kills him. Tree runs into Lori, who tells her that Babyface cannot be Tombs because she just took him in for surgery. The pair try to escape but Babyface stabs Lori, then chases Tree to the roof where she falls to her death. Tree wakes at the beginning of her loop, and demands that Ryan and his team help her escape it, requiring they test dozens of algorithms. At Carter's suggestion, Tree serves as the group's recorder, killing herself at the end of each day so they can start again. Eventually, her injuries catch up with her and she faints. Waking up in the hospital, Tree steals a gun to go after Tombs, only to find Lori already dead. Babyface attacks and Tree shoots him dead. However, a second Babyface attacks, forcing Tree to kill herself again.

The group finally discovers the correct algorithm, but a technical issue forces a delay. Faced with a choice of which reality she wants to be in when both time loops close, Tree decides to remain in the current dimension. Carter urges Tree to consider the consequences of living a life that is not truly hers, and states that her experience with grief helped shape the person she is now. To hide from Babyface, Tree convinces her parents to drive her home. Later that evening, the news reports that Carter was murdered along with Lori at the hospital. Unable to contact Ryan to stop the experiment, Tree kills herself so she can save Carter and Lori. The loop restarts, and Tree decides to return to her own reality. She advises Lori to end her affair with her professor, Dr. Gregory Butler, discovers that Danielle is cheating on Carter, and has a final conversation with her mother at their birthday lunch.

Bronson confiscates the reactor before the group can activate it. Believing she is too weak to survive another loop, Tree insists they retrieve the device. The group enlists Danielle to distract Bronson while they recover the reactor. As Ryan readies the device, Tree goes to the hospital to rescue Lori from Tombs, but is trapped by the second Babyface – revealed to be Dr. Butler trying to bury the evidence of his affair with Lori. Dr. Butler's wife Stephanie appears and shoots Lori, revealing she is in league with her husband before he betrays and kills her. Carter arrives and Dr. Butler chases Tree, before she outsmarts and kills him. Lori survives, and Tree and Carter kiss as the reactor activates, sending Tree back to her original dimension on Tuesday the 19th.

Tree, Carter, Ryan, Samar and Dre are forced to pick up garbage across campus as punishment for defying Bronson. They are then escorted to a DARPA laboratory, where the reactor has been moved for further experimentation. Tree says she knows the perfect subject. In her bedroom, Danielle wakes up, screaming in horror.

Retrieved from "https://movies.fandom.com/wiki/Happy_Death_Day_2U?oldid=182319"
Community content is available under CC-BY-SA unless otherwise noted.