Start a Wiki
watch 01:16
The Loop (Movies)
Do you like this video?
Happy New Year 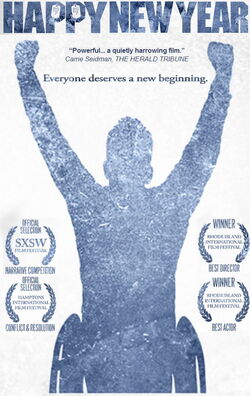 Happy New Year is a narrative feature film that puts a human face on veterans and post-traumatic stress.

Staff Sgt. Cole Lewis a war-torn Marine who returns home to face his fiercest battle yet --- the one against himself. Lewis, scarred with mental and physical wounds from combat in Iraq and Afghanistan, begins to find humanity, compassion and friendship among a group of similarly injured soldiers in the psychiatric ward at a remote veterans hospital. The men – survivors of World War II, Vietnam, and recent conflicts in the Middle East--become Lewis's new family. With them, he will attempt to redefine his sense of self, and find a new place in the world. Through humor and pathos, Lewis becomes a ray of hope in the ward, as the men find a way to overcome their post-war trauma. But just as their luck starts to change, Lewis faces his fiercest battle yet.

Retrieved from "https://movies.fandom.com/wiki/Happy_New_Year?oldid=169545"
Community content is available under CC-BY-SA unless otherwise noted.