View src
watch 02:56
Doctor Strange in The Multiverse o Madness - The Loop
Do you like this video?
Play Sound
Harrison Ford 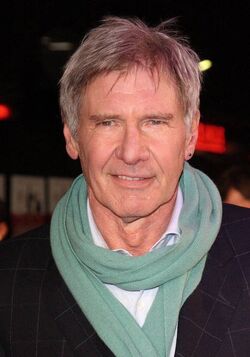 Harrison Ford is an American actor. He is best known for his performances as the tough, wisecracking space pilot Han Solo in the Star Wars films, and the archaeologist action hero Indiana Jones in Raiders of the Lost Ark and neo-noir detective Rick Deckard in Ridley Scott's Blade Runner.

Ford has been the star of many high grossing Hollywood blockbusters such as Patriot Games, Air Force One and The Fugitive which have distanced him from his earlier 'genre film' roles.

Coincidentally, it was his work as a carpenter that would land Ford his biggest role. In 1975, director George Lucas, who had cast Ford in a pivotal supporting role in "Graffiti", hired Ford to build some cabinets in his home and used him to read lines for actors being cast for parts in Star Wars Episode IV: A New Hope. It was Steven Spielberg who first noticed that Ford was well suited for the part of Han Solo.

The 6'1" Ford went on to star as Han Solo in the original Star Wars trilogy; he had originally wanted his character to die in the third film in the series, saying that it would lend more dramatic weight to the film, but George Lucas disagreed with him. He starred as Indiana Jones in Raiders of the Lost Ark and its two sequels to date, and as Jack Ryan in Tom Clancy's Patriot Games and Clear and Present Danger. Ford's other well-known films include Blade Runner, Witness, The Fugitive (1993), and the remake of Sabrina, among others. While often playing the leading man or the hero of many action films, Ford had a change of pace, playing an adulterous husband with a terrible secret in What Lies Beneath.

Ford's star power has waned in recent years, the result of appearing in numerous critically derided financial failures like K-19: The Widowmaker and Hollywood Homicide. He intends to film a fourth Indiana Jones movie with George Lucas and Steven Spielberg, which may be released in 2007. In 2004, Ford declined a chance to star in the thriller Syriana, commenting that "I didn't feel strongly enough about the truth of the material and I think I made a mistake"; he was offered the role eventually played by George Clooney, who won an Oscar for the role.[6]. He also turned down leading roles in Traffic and A History of Violence.

Ford has been married twice. He married Mary Marquardt in 1964, and divorced her in 1979. He had two children with her, Benjamin (born in 1967) and Willard (born in 1969). He married again, to Melissa Mathison, screenwriter of The Black Stallion, Kundun, and E.T. the Extra-Terrestrial, on March 14, 1983. They had two children: a son, Malcolm (born on March 10, 1987), and a daughter, Georgia (born on June 30, 1990). Mathison filed for legal separation in 2001, and their January, 2004 divorce was one of the most expensive in Hollywood history. Ford has been dating actress Calista Flockhart since 2002.

Ford is a private pilot of both planes and helicopters, and owns an 800-acre (3.2-km²) ranch in Jackson Hole, Wyoming, approximately half of which he has donated as a nature reserve.

In recent years, Ford has been outspoken on political issues. Though he dislikes public speaking, Ford once appeared before a U.S. Senate subcommittee on behalf of the people of Tibet. In 2003, he condemned the Iraq war in an interview with a Spanish newspaper. He went on to criticise the proliferation of firearms in the United States, something that caused controversy given that he has used handguns in most of his movies. Ford later declared his opposition to the recall of Governor Gray Davis, and warned that replacing him with Republican candidate Arnold Schwarzenegger would be a disaster for the state of California.

Wikiquote has a collection of quotations from or about:
Harrison Ford
Community content is available under CC-BY-SA unless otherwise noted.
Advertisement