Harry Potter and the Philosopher's Stone

View src
watch 01:36
We're Getting Mutants in the MCU - The Loop
Do you like this video?
Play Sound

Harry Potter and the Philosopher's Stone

Warner Bros. bought the film rights to the book in 1999 for a reported £1 million. Production began in the United Kingdom in 2000, with Columbus being chosen to create the film from a short list of directors that included Steven Spielberg and Rob Reiner. J. K. Rowling insisted that the entire cast be British or Irish, in keeping with the cultural integrity of the book. The film was shot at Leavesden Film Studios and historic buildings around the U.K.

The film was released in the U.K. and U.S. in November 2001. It received positive critical reception, made more than $974 million at the worldwide box office and was nominated for many awards, including the Academy Awards for Best Original Score, Best Art Direction and Best Costume Design. As of May 2013, it is the seventeenth highest-grossing film of all time, the highest-grossing film of 2001 and the second highest-grossing film in the series behind the final film, Harry Potter and the Deathly Hallows – Part 2.

In 1991, Harry Potter is a seemingly ordinary boy with a lightning-shaped scar on his forehead living with the Dursleys, his only remaining relatives who treat him badly, in Privet Drive, Surrey. After inadvertently causing an incident on a family outing and receiving countless unsolicited letters by owl, half-giant groundskeeper Rubeus Hagrid appears and gives Harry a cake for his 11th birthday. He acknowledges Harry a wizard, known for being the first and only one to survive an attack by the powerful dark wizard – Lord Voldemort – who terrorized the Wizarding World and murdered those who stood in his way, including Harry's parents James and Lily Potter. However, Voldemort mysteriously lost his body against Harry as an infant. Petunia Dursley has always been jealous of her sister Lily for being an only wizard, and was taking it out on Harry all this time. Hagrid clarifies to Harry that he's been accepted to Hogwarts School of Witchcraft and Wizardry and leaves with him. First, Harry goes to Gringotts Bank at the hidden London Street, Diagon Alley, to make an account, while Hagrid takes a secret item from Vault 713. Then, Harry chose a phoenix-feather wand from the wand-maker Ollivander, who memorized that its twin was the one that gave him the scar. After buying his school supplies and a pet owl named Hedwig, Harry boards the train to Hogwarts via the concealed Platform 9¾ in King's Cross Station.

On the train, Harry meets Ron Weasley, a boy from a large but poor pure-blood wizarding family, and Hermione Granger, a bright and "little know-it-all" witch born to non-magical parents. Once they arrive, Harry encounters Draco Malfoy and all the other first-year students are sorted between four houses: Gryffindor, Hufflepuff, Ravenclaw, and Slytherin. Draco is sorted in Slytherin. Because Slytherin is noted for being the house of darker wizards and witches, Harry convinces the Sorting Hat not to put him in Slytherin. He ends up in Gryffindor along with Ron and Hermione. Ron's older brothers were all placed in Gryffindor: the mischievous twins Fred and George, Percy the senior pupil, Charlie (who researches dragons in Romania) and Bill (who works for Gringotts Bank in Egypt). This year the four houses participate in winning the House Cup define by the highest points earned. Harry gets comfortable with his new roommates and meets Nearly Headless Nick the ghost patron of Gryffindor House. Harry read upon a newspaper that somebody broke into Gringotts Bank and tried to take whatever was in Vault 713, soon he, Ron and Hermione decide to investigate what's lurking around Hogwarts.

Harry begins learning wizardry and discovers more about his past and his parents. He gets recruited for Gryffindor's Quidditch (a sport in the wizarding world where people fly on broomsticks and catch a Golden Snitch) team as a Seeker, as his father was before him. Oliver Wood the Keeper teaches Harry how to play Quidditch. One night Harry, Ron, and Hermione discover a large three-headed dog named Fluffy (owned by Hagrid) on a restricted floor in the school. On Halloween, someone let loose a troll in the school that almost crushed Hermione, but Harry and Ron saved her. Slytherin versus Gryffindor in Quidditch, while Harry catches the Snitch (with his mouth), his potions teacher, the unfriendly Severus Snape, seemingly tried to throw Harry off the broom in high air. On Christmas Day, Harry is gifted an Invisibility Cloak formerly owned by his father from a mysterious sender, which he uses to sneak around and gather possible information.

The trio find out Fluffy is guarding the Philosopher's Stone, an item created by Nicolas Flamel that can be used to grant its owner immortality, which Hagrid had accidentally revealed to have taken from Vault 713 for protection. Harry encounters a shadowy figure in the Forbidden Forest where he, Ron, Hermione, and Draco are serving detention by helping Hagrid look for an injured unicorn after being caught wandering around at night. The figure was draining unicorn's blood to extend its own lifespan, and then a centaur scares it off saving Harry. Harry concludes Snape is trying to obtain the stone in order to restore Voldemort's physical form, as his scar pains from seeing him. After hearing Hagrid talking about a suspicious character who wanted to know Fluffy falling asleep if played music, Harry, Ron, and Hermione set out to find the stone before Snape does. They face a series of tasks that are helping guard the stone which include surviving a deadly plant known as Devil's Snare, flying past a swarm of bird-shaped flying keys and winning a dangerous, life-sized game of chess.

After getting past the tasks, Harry alone discovers it was really the Defence Against the Dark Arts teacher Professor Quirrell who been trying to steal the stone. He had let the troll in as a diversion, though Snape stopped him and was protecting Harry all along. Then, Quirrell removes his turban and reveals Voldemort to be living on the back of his head. Voldemort attempts to bribe Harry to give him the stone, which Harry suddenly finds in his pocket from the Mirror of Erised as the result of an enchantment by the famous elder headmaster, Albus Dumbledore, by promising to bring his parents back from the dead, but Harry refuses. Quirrell resorts to kill him and take the stone when Harry's touch turns Quirrell into dust. When Harry gets up, Voldemort's spirit arises from Quirrell's ashes and passes through Harry, knocking him unconscious before fleeing.

Harry wakes up in the school's hospital wing with Dumbledore at his side. The headmaster explains the stone has been destroyed and that, despite Ron nearly being killed in the chess match, he and Hermione are both fine. Dumbledore reveals Harry was able to defeat Quirrell because when Harry's mother died to save him her death bequeathed Harry a magical, love-based protection against Voldemort. However, Dumbledore believes there are ways which Voldemort can return because something is preventing him from total demise. Just when Slytherin thought to have won the House Cup, Harry, Ron and Hermione are rewarded with last minute house points for their heroism, and Neville Longbottom is rewarded for standing up to them, winning Gryffindor the House Cup. Before Harry and the rest of the students leave for the summer, Harry realizes that while all other students are going home and Hagrid giving him a photo album, Hogwarts is truly his home. 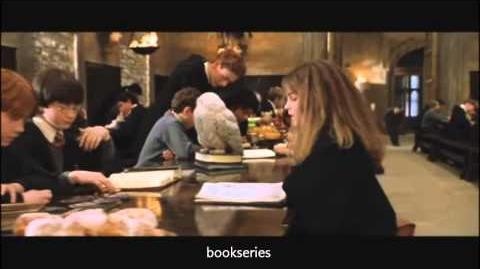 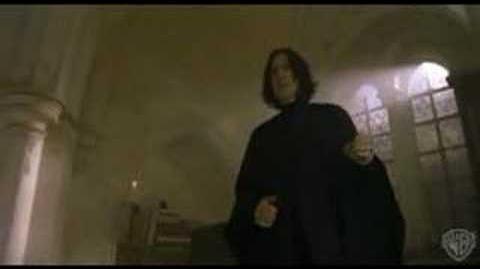 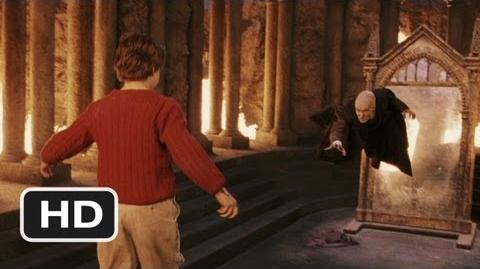