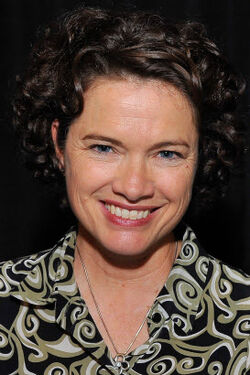 Heather Elizabeth Langenkamp (born July 17, 1964) is an American actress, make-up artist and producer. She is best known for her role as Nancy Thompson from the A Nightmare on Elm Street films.

Langenkamp was born in Tulsa, Oklahoma to Mary Alice (née Myers) and Robert Dobie Langenkamp. She is of German, Scottish, and English ancestry. Langenkamp attended Holland Hall School in Tulsa. She graduated from The National Cathedral School for Girls in Washington, D.C.

Langenkamp rose to prominence when Wes Craven cast her as teen heroine Nancy Thompson in his hugely successful film A Nightmare on Elm Street, the first film in what became a series. Craven wanted someone very 'non-Hollywood' to play Nancy, and he believed Langenkamp met this quality. She reprise her role in the third film A Nightmare on Elm Street 3: The Dream Warriors. She returned to the franchise appearing in Wes Craven's New Nightmare.