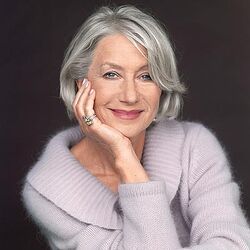 Mirren was born in Queen Charlotte's Hospital, Chiswick, West London. Her father, Vasiliy Petrovich Mironov (1913–1980), was of Russian origin, originally from Smolensk Oblast and her mother, Kitty (1909–1996), was English. Mirren's paternal grandfather, Colonel Pyotr Vasilievich Mironov, was in the Tsarist Army and fought in the 1904 Russo-Japanese War. He later became a diplomat, and was negotiating an arms deal in Britain, when he and his family were stranded during the Russian Revolution. The former diplomat became a London cab driver to support his family.

His son, Helen Mirren's father, changed the family name to the Scottish-sounding Mirren in the 1950s and became known as Basil Mirren. He played the viola with the London Philharmonic before World War II, and later drove a cab and was a driving-test examiner, before becoming a civil servant with the Ministry of Transport. Mirren's mother was from West Ham, East London, and was the 13th of 14 children born to a butcher whose father had been the butcher to Queen Victoria. Mirren considers her upbringing to have been "very anti-monarchist".

The first house Mirren remembers living in was in Westcliff-on-Sea, Essex, when she was two or three years old, after the birth of her younger brother, who was named Peter Basil after his grandfather and great-great-grandfather. Mirren was the second of three children, born two years after her older sister Katherine ("Kate"; born 1942). She later lived in Leigh-on-Sea.

Mirren attended St Bernard's High School for Girls in Southend-on-Sea, where she acted in school productions, and subsequently a teaching college, the New College of Speech and Drama in London, "housed within Anna Pavlova's old home, Ivy House" on the North End Road – which leads from Golders Green to Hampstead, N. London. At age eighteen, she auditioned for the National Youth Theatre and was accepted. By the time she was 20, she was Cleopatra in the NYT production of Antony and Cleopatra at the Old Vic, which led to her signing with the agent Al Parker.

Mirren has also appeared in a large number of films throughout her career. Some of her earlier film roles include Age of Consent, O Lucky Man!, Caligula, Excalibur, 2010, The Long Good Friday, White Nights, When the Whales Came and The Mosquito Coast. She appeared in Some Mother's Son, Painted Lady, The Prince of Egypt and The Madness of King George. One of her other film roles was in Peter Greenaway's The Cook, The Thief, His Wife and Her Lover, as the eponymous thief's wife, opposite Michael Gambon. Her favourite film is Teaching Mrs. Tingle, in which she plays sadistic History teacher, Mrs Eve Tingle.

Mirren continued her successful film career when she starred in Gosford Park with Maggie Smith and Calendar Girls where she starred with Julie Walters. Other more recent appearances include The Clearing, Pride, Raising Helen, and Shadowboxer. Mirren also provided the voice for the supercomputer "Deep Thought" in the film adaptation of Douglas Adams' The Hitchhiker's Guide to the Galaxy. During her career, she has portrayed three British queens in different films and television series: Elizabeth I in the television series Elizabeth I (2005), Elizabeth II in The Queen (2006), and Queen Charlotte, the wife of George III, in The Madness of King George(1994). She is the only actress ever to have portrayed both Queens Elizabeth on the screen. Mirren's title role of The Queen earned her numerous acting awards including a BAFTA, a Golden Globe, and an Academy Award, among many others. During her acceptance speech at the Academy Award ceremony, she praised and thanked Elizabeth II and stated that she had maintained her dignity and weathered many storms during her reign as Queen. Mirren later appeared in supporting roles in the films National Treasure 2: Book of Secrets, Inkheart, State of Play, and The Last Station, for which she was nominated for an Oscar.

In preparation for her role as a retired Israeli Mossad agent in the film The Debt, Mirren reportedly immersed herself in studies of Hebrew language, Jewish history, and Holocaust writing, including the life of Simon Wiesenthal, while in Israel in 2009 for the filming of some of the movie's scenes. The film is a remake of a 2007 Israeli film of the same name (Hebrew: Ha-khov).

Retrieved from "https://movies.fandom.com/wiki/Helen_Mirren?oldid=177786"
Community content is available under CC-BY-SA unless otherwise noted.