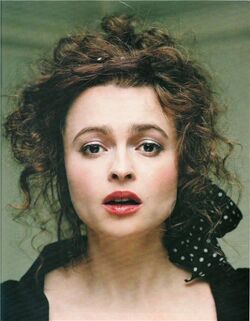 She is the villain Serena Kogan in Terminator Salvation. She also plays the famous fashion designer Rose Weil in the 2018 American heist-comedy film, Ocean's 8.

Bonham Carter was in a domestic partnership with director Tim Burton for over a decade and the pair sired two children together. In the past, she has also been involved with Kenneth Branagh, Rufus Sewell, and Steve Martin.

Retrieved from "https://movies.fandom.com/wiki/Helena_Bonham_Carter?oldid=239853"
Community content is available under CC-BY-SA unless otherwise noted.