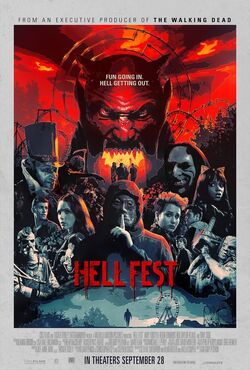 Hell Fest is introduced as a horror theme park which travels across the country during the Halloween season. A young woman from Orange County is shown to be separated from her group during one of the mazes. There she is confronted by a masked serial killer, figure known as "The Other". She recognizes the Other as a man who had been following her and her group of friends the entire night. The Other attacks the girl, stabbing her in the gut before hanging her. The young woman's corpse appears to blend in with the other prop bodies as the Other leaves the scene.

Natalie (Amy Forsyth) is shown to be arriving at her former apartment where her former roommate, Brooke (Reign Edwards), still resides. She greets her old friend but is disappointed to learn that Brooke has a new roommate, Taylor (Bex Taylor-Klaus), a former classmate whom Natalie does not get along with. Though Natalie's visit was planned Brooke is shown to have been uncertain that Natalie would actually arrive. As such Brooke and Taylor arranged a visit to Hell Fest with Gavin, a friend that Natalie has a mutual crush on, and their respective boyfriends Quinn and Asher.

The group meet at Hell Fest where Gavin hands all of them VIP wrist bands so that they can skip the lines. At the same time the Other arrives wearing worn out steel toed boots. The Other notices a young woman named Britney insult a worker at the amusement park. After Britney walks into the Other and dismisses him as not being scary, he targets her, stealing an ice pick from a worker making snow cones. The group arrive at a haunted maze where the guys separate from the girls. As the girls are about to finish the maze they watch as Britney appears, disheveled and in fear, telling the girls that a man is after her. The girls assume it is part of the park experience as The Other arrives in search of Britney.

The Other sets his sights on Natalie, who deems him unscary before revealing Britney's location. The Other drags Britney from her hiding place and holds her down in view of the girls. Brooke and Taylor decide to exit while Natalie chooses to stay. Britney struggles but is stabbed in the gut and killed. Natalie realizes that the murder seems very real and leaves. After meeting back up with her friends she turns and notices the Other watching them. She notices him a number of times, complaining to her friends that she feels he is stalking the group. The group dismisses her until Brooke catches the Other stealing pictures from a photo booth where Gavin and Natalie were kissing.

The group believes that the man has left them alone and decide to enter The Dead Lands area of the park, which is described as more intense than the public area of Hell Fest. Gavin chooses to stay behind in order to obtain a prize for Natalie, opting to steal a prize from the employee lockers. Gavin is cornered by the Other, who proceeds to smash his head in with a mallet, killing him. The Other steals Gavin's phone and uses it to communicate with Natalie. The friends enter the Dead Lands where they learn that the mask worn by The Other is in fact a mask worn by many employees in the Dead Lands. Natalie, Brooke, and Taylor decide to go into one maze while Quinn and Asher choose to go into another.

In the maze Natalie is nearly cornered by the Other but is able to escape. Meanwhile Asher and Quinn are separated in their maze. The Other finds and attacks Asher and, after a short struggle, stabs Asher in the eye with a syringe. The group is distracted from Asher's disappearance by an employee who sprays Natalie with an ooze. Natalie cleans up in the bathroom with Brooke's assistance. There the two agree that they have let their friendship weaken and decide to go to Spain after the Halloween season. Brooke leaves Natalie alone to finish cleaning up. There Natalie texts Gavin only to hear his phone in a nearby stall. She texts again only to hear the same notification. The Other corners Natalie in a bathroom stall before entering an adjacent stall and attacking her from above.

Natalie escapes and with Brooke's help warns security. The security guard dismisses the attacks as part of the park experience and possibly pranks being pulled by Gavin. Brooke, now believing Natalie, agrees to warn Taylor and Quinn about the danger. They arrive too late though as Taylor has volunteered to be "beheaded" in front of a live crowd via guillotine. As part of the show the performer (Tony Todd) has a fellow employee known as “The Executioner” restrain Taylor into the guillotine. Natalie recognizes the worn steel boots from the bathroom attack being worn by The Executioner. She attempts to warn Taylor but is stopped by security. The blade of the guillotine is dropped and 'beheads' Taylor, though it is clearly all for show and Taylor is shown to be fine. Security reprimand Natalie while the curtains close leaving Taylor alone and restrained with the Executioner.

The Executioner forcibly restrains Taylor in a way that leaves her neck exposed to the guillotine before revealing himself to Taylor. The Other drops the guillotine blade, but as it is dull it merely lacerates the back of Taylor's neck. Taylor is able to undo her restraints and escape after the lever on the guillotine gets jammed. Taylor runs through the crowd in her attempts to escape, running by the group. Quinn notices her and follows her and is in turn followed by Brooke, Natalie, and security. Thinking that Taylor and the Other are employees, a park-goer stops Taylor during her escape and shoves her into the Other's grasp where he slashes her cheek with a knife before stabbing her in the gut. As he is attacking her Quinn confronts the Other but is himself stabbed once in the gut and once in the heart. Brooke is distraught as she watches her friends die but Natalie urges her to escape as the nearby parkgoers panic.

The park is closed while security contact the police, now aware of the real danger. Brooke and Natalie mistake the final most intense maze of the park titled "Hell" as the exit and become trapped after the Other follows them and locks them inside. Realizing they must go through the maze in order to escape, both Natalie and Brooke are injured by the Other, now wielding an ax which he stole from the ride. The girls are separated and as The Other corners Brooke, Natalie locates them and stabs the Other. With the Other incapacitated, Natalie and Brooke make it to the exit where police are waiting.

Though safe in police custody, the girls learn that the Other has escaped. A car is shown pulling into a suburban house while news confirm some fatalities (announcing four were killed) and their connections to the opening scene. The car is shown to be driven by the Other, who locks his mask in with a number of masks suggested to be masks connected to other theme parks, and he keeps the picture of Natalie and Gavin. The Other then walks into the living room of the house where a young girl is sleeping. The young girl awakens and gleefully greets the man (whose face is never shown) as "Daddy". She asks if he got her anything, and he shows her a stuffed animal Asher won for Taylor.

Retrieved from "https://movies.fandom.com/wiki/Hell_Fest?oldid=138377"
Community content is available under CC-BY-SA unless otherwise noted.