watch 00:59
The Loop (Movies)
Do you like this video?
Hereditary 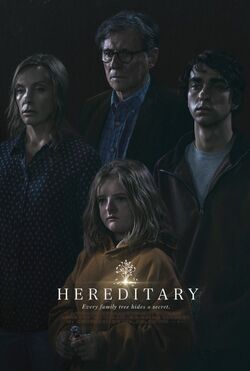 Annie Graham is a miniatures artist who lives in Utah with her husband, Steve; their 16-year-old son, Peter; and their eccentric and reserved 13-year-old daughter, Charlie. At the funeral of her secretive mother, Ellen Leigh, Annie delivers a eulogy explaining their fraught relationship and her mother's extremely private life. A week later, Steve is informed that Ellen's grave has been desecrated, while Annie thinks she sees an apparition of Ellen in her workshop. At a support group for the bereaved, Annie reveals that the rest of her family suffered from mental illness that resulted in their deaths and how Ellen was a significant figure in raising Charlie.

To attend a party, Peter lies that he is going to a school event, and Annie forces him to take Charlie with him. Unsupervised, Charlie eats cake containing nuts, to which she is allergic, and falls into anaphylactic shock. As Peter drives her to a hospital, Charlie leans out of the window for air. Peter swerves to avoid a dead deer and Charlie is decapitated by a telephone pole. In shock, Peter silently drives home and leaves his sister's corpse in the car for their mother to discover the next morning. The family grieves following Charlie's funeral, heightening tensions between Annie and Peter and causing Annie to behave coldly towards Steve. Peter is plagued by Charlie's presence around the house.

Annie is befriended by a support group member, Joan. Annie tells her she used to sleepwalk and recounts an incident in which she woke up in Peter's bedroom to find herself, Peter, and Charlie covered in paint thinner with a lit match in her hand. Joan teaches Annie to perform a séance to communicate with Charlie. Annie convinces her family to attempt the séance. Objects begin to move and break, terrifying Peter, and Charlie seemingly possesses Annie until Steve douses her with water. Annie suspects that Charlie's spirit has become malevolent. She throws Charlie's sketchbook into the fireplace but her sleeve also begins to burn. She retrieves it and heads to Joan's apartment for advice but Joan is nowhere to be found.

Annie notices that Joan's welcome mat resembles her mother's craft work. She goes through her mother's possessions and finds a photo album linking Joan to Ellen, and a book with information about a demon named Paimon, who wishes to inhabit the body of a male host. In the attic, Annie finds Ellen's decapitated body with strange symbols on the wall written in blood. At school, Peter slams his head against his desk, breaking his nose and is brought home. Annie shows Steve her mother's body and the sketchbook. Annie begs Steve to burn the sketchbook so she can sacrifice herself to stop the haunting, but Steve assumes she has gone mad, accusing her of desecrating Ellen's grave herself. When Annie throws the book into the fireplace, Steve bursts into flames.

Peter awakens to find his father's body. Annie chases him into the attic, which is decorated with occult imagery. Levitating, Annie beheads herself with a piano wire as naked coven members look on. Peter jumps out of the window. As he lies on the ground, a light enters his body and he wakes up. He follows Annie's levitating corpse into Charlie's treehouse, where Charlie's crowned, severed head rests atop a mannequin. Joan, other coven members and the headless corpses of his mother and grandmother bow to him. Joan, addressing him as Charlie, swears an oath to him as Paimon, stating that he has been liberated from his female host, and is free to rule over them. 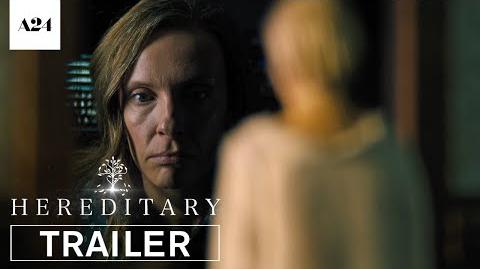 Hereditary Official Trailer HD A24
Add a photo to this gallery 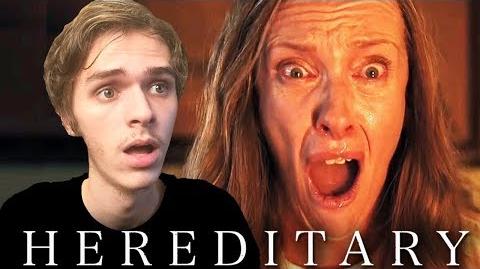 Hereditary - Movie Review
Add a photo to this gallery

Retrieved from "https://movies.fandom.com/wiki/Hereditary?oldid=172440"
Community content is available under CC-BY-SA unless otherwise noted.