Moviepedia
Register
Don't have an account?
Sign In
Advertisement
in: Film articles without a specified rating, Comedies, Comedic films,
and 5 more

English
Hit and Run is a 2012 American romantic/action/comedy film written and co-directed by Dax Shepard. It is set to be released on August 24, 2012 worldwide.

Former getaway driver Charlie Bronson jeopardizes his Witness Protection Plan identity in order to help his girlfriend get to Los Angeles. The feds and Charlie's former gang chase them on the road. 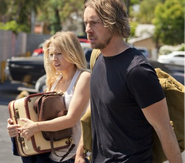