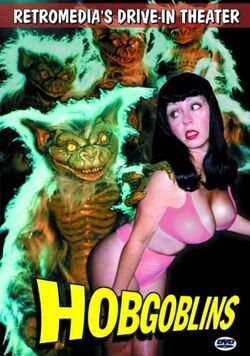 Hobgoblins is a 1988 low-budget horror-comedy B-movie directed, written, and produced by Rick Sloane, who also served as cinematographer and editor. The film is often seen as a rip-off of Gremlins and earned infamy after it was shown on Mystery Science Theater 3000. It has since been often regarded as one of the worst films ever made.

A young security guard must track down diminutive aliens who kill people even as they make their fantasies come true.

Hobgoblins is perhaps best known for being shown on episode #907 of Mystery Science Theater 3000. MST3K writer Paul Chaplin later commented on Hobgoblins, saying, "It shoots right to the top of the list of the worst movies we've ever done." Rick Sloane in fact submitted Hobgoblins to the MST3K team himself, and enjoyed the episode enough that he based the theme song to Hobgoblins 2 on a song Mike and the Bots sing during the episode.

Retrieved from "https://movies.fandom.com/wiki/Hobgoblins?oldid=70832"
Community content is available under CC-BY-SA unless otherwise noted.