Start a Wiki
watch 01:27
The Loop (Movies)
Do you like this video?
Holmes & Watson 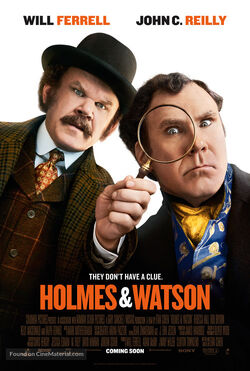 A comedic take on the famed literary characters Sherlock Holmes and Dr. John Watson as they use their brilliant minds to stop rival James Moriarty from assassinating the queen.

In July 2008, it was reported that Sacha Baron Cohen would play Holmes and Will Ferrell would play Dr. Watson, in a comedic take on Sherlock Holmes produced by Judd Apatow with a script written by Etan Cohen for Columbia Pictures.

On August 17, 2016, it was reported that Ferrell and John C. Reilly would star in the film Holmes and Watson written and directed by Etan Cohen, with Ferrell playing Holmes and Reilly playing Watson. On November 14, 2016, Lauren Lapkus was cast in the film to play Millie, with whom Sherlock is obsessed. On November 17, 2016, Rob Brydon, Kelly Macdonald, and Rebecca Hall joined the cast. On January 6, 2017, Ralph Fiennes and Hugh Laurie joined the cast. Filming commenced in early December 2016 in London at Shepperton Studios. In early February 2017, film crews were on location at Hampton Court Palace.

Retrieved from "https://movies.fandom.com/wiki/Holmes_%26_Watson?oldid=156652"
Community content is available under CC-BY-SA unless otherwise noted.