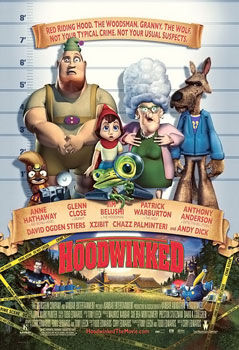 Distributed By
The Weinstein Company
Country

Hoodwinked! was among the earliest computer-animated films to be completely independently funded. Working apart from a major studio allowed the filmmakers greater creative control, but also restrained them economically. Due to the film's small budget, its animation was produced in the Philippines, with a less realistic design inspired by stop motion films. The Weinstein Company did not sign on as the film's distributor until near the end of production, and while the company had many roles recast, it otherwise made few changes to the film.

Structurally, the film was inspired by non-linear crime dramas, such as Rashomon and Pulp Fiction. It was released shortly after the first two installments in the successful Shrek series, which accentuated the fairy tale parody genre of which it is a part. The film however, intentionally deviated from that series in its style of humor and in certain plot elements. This was in part based on Cory Edwards' concerns over exposing children to the high level of cynicism often found in the genre.

Critical reception to the film was varied; although its script and cast were praised by many reviews, its animation quality was heavily criticized. The film was a commercial success, earning over thirteen times its budget. A sequel, Hoodwinked Too! Hood vs. Evil, directed by Mike Disa, and written by Cory Edwards, Todd Edwards and Leech, was released in 2011 to negative reviews and financial failure.

Little Red Riding Hood discovers that the Big Bad Wolf has disguised himself as Granny, just as the axe-wielding woodsman bursts through the window, startling everyone. The police quickly arrive, and Red, Wolf, Granny and the Woodsman are questioned by detective Nicky Flippers about the events leading up to the incident.

Red explains that she was delivering goodies for her grandmother when she discovered a threat from the mysterious Goodie Bandit. Hoping to save her Granny’s recipes, she embarked upon a journey to take them to the top of a nearby mountain where her Granny lives. On her way, she encountered the Wolf, who asked her a series of suspicious questions. She managed to escape, and eventually reached her Granny’s house; however she found the Wolf already waiting in ambush.

What at first seems to be an open-and-shut case becomes confused though, once it is learned that the Wolf is an investigative reporter. He reveals that he was searching for a lead on the identity of the Goodie Bandit, and had reason to believe that Granny and Red were the culprits. Locating Red, he questioned her, hoping to get to the bottom of the mystery. When Red escaped, he headed for her Granny’s house and arriving first, went undercover, hoping to trick her into giving him the evidence he needed.

When questioned, the Woodsman reveals that he is in fact an aspiring actor who was only trying out for the part of a woodsman in a commercial. After his schnitzel truck was robbed by the Goodie Bandit, he went out into the woods to get in character for his role, and spent the rest of the day felling trees. An especially large tree rolled after him, and pushed him through the window of Granny’s home. The investigation then turns to Granny, who reveals that, unbeknownst to her family, she is an extreme sports enthusiast. During a ski race earlier that day, she was attacked by the opposing team, but got away safely after learning that they were hired by the Goodie Bandit.

Despondent over her Granny’s lack of honesty, Red wanders off alone. Meanwhile, Nicky Flippers realizes that the one commonality between all four stories was a bunny named Boingo, and concludes that he is the Goodie Bandit. However, Boingo has already sneaked into the home and stolen Granny’s recipes. Red sees Boingo and follows him to his hideout at a cable car station, but the police pursue him in the wrong direction. Granny, the Wolf, and the Woodsman manage to locate Boingo as he is explaining his evil scheme to Red. Boingo plans to add an addictive substance to the stolen recipes, and then explode the forest, making way for new real estate for expanding his business.

The Wolf and the Woodsman go undercover to distract Boingo as Granny sneaks into his lair, but open conflict ensues. Boingo sends a bound and gagged Red down the mountain in a cable car loaded with explosives, and Granny goes after her, with Boingo and his henchmen in pursuit. Red manages to free herself, and escapes with Granny, while the police, who have been located by the Wolf’s assistant Twitchy, are waiting at the bottom of the mountain to arrest Boingo and his henchmen. Some time later, the Woodsman finds success as part of a yodeling troupe, and Red, Granny, the Wolf, and Twitchy are enlisted by Nicky Flippers to join a crime solving organization called Happily Ever After Agency.