The film went on to gross over $17 million and became one of the iconic comedies of the 1980s.

The film stars Patrick Houser as Harkin Banks, a young and ambitious freestyle skier from Idaho who is determined to prove himself in a freestyle skiing competition at Squaw Valley.

Along the way he teams with a pack of fun-loving incorrigibles who called themselves the "Rat Pack" (whose leader, Dan O'Callahan is played by David Naughton) picks up an Austrian nemesis named Rudi (John Patrick Reger) & enters a love triangle with a pair of blondes, a young woman named Sunny (Tracy N. Smith) and the more mature Sylvia Fonda (played by 1982 Playboy Playmate of the Year Shannon Tweed in just her second major film role).

The movie ends with a terrific extended race scene, all of the characters take part in a 'Chinese Downhill' to determine the real champion of the competition.

The filming dates for "Hot Dog... The Movie" began on March 21, 1983 and was filmed in Squaw Valley, California.

Janet Maslin (writing in the New York Times) gave the film generally positive review, describing it as "light and less moronic than it might have been."

Tony Hansen from eFilmCritic.com gave the film a negative review, saying that it "has the capacity to entertain because it has no high aspirations. It's so puerile that it even goes sub-retarded." 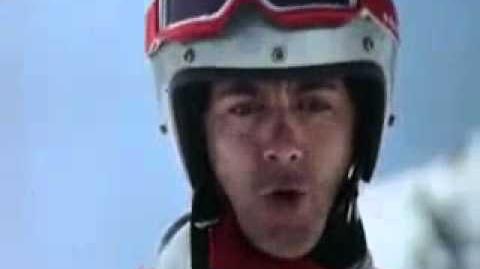 Hot Dog... The Movie (1984) Trailer
Add a photo to this gallery
Retrieved from "https://movies.fandom.com/wiki/Hot_Dog%E2%80%A6The_Movie?oldid=168883"
Community content is available under CC-BY-SA unless otherwise noted.