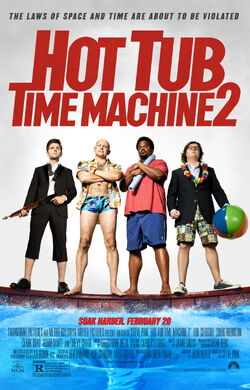 Hot Tub Time Machine 2 (2015) is an American sci-fi comedy directed by Steve Pink, written by Josh Heald, and starring Craig Robinson, Adam Scott, Rob Corddry, Chevy Chase, Gillian Jacobs, and Clark Duke. It is the sequel to the 2010 film Hot Tub Time Machine, and is currently scheduled for theatrical release in the United States on February 20, 2015.

When Lou, who has become the "father of the Internet," is shot by an unknown assailant, Jacob and Nick fire up the time machine again to save their friend.[1]