Start a Wiki
watch 01:27
The Loop (Movies)
Do you like this video?
Hotel Transylvania 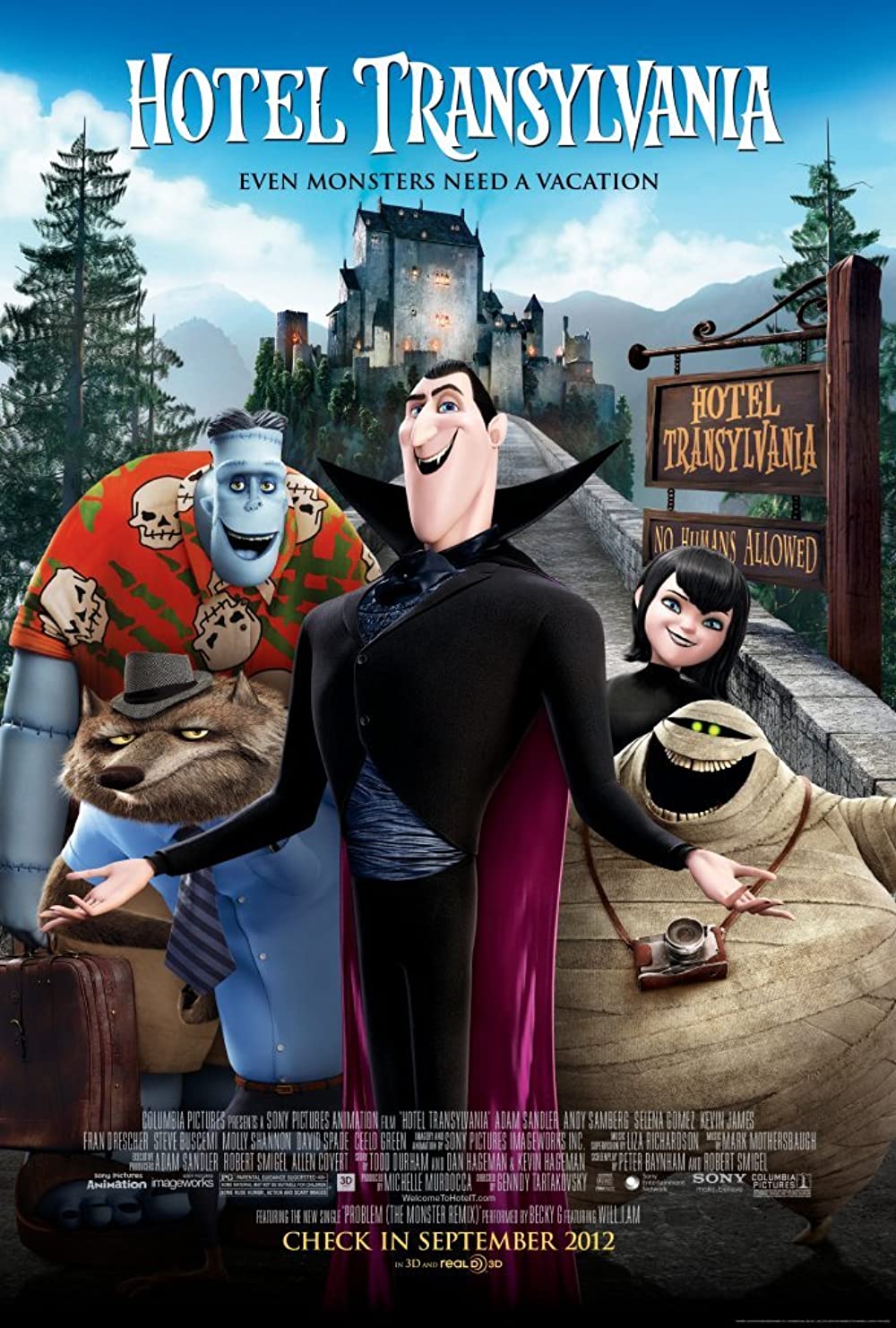 Hotel Transylvania is a 2012 American computer-animated comedy film produced by Sony Pictures Animation and distributed by Columbia Pictures. It was directed by Genndy Tartakovsky, the creator of Samurai Jack, Dexter's Laboratory, and Sym-Bionic Titan, and produced by Michelle Murdocca. The film features the voices of Adam Sandler, Selena Gomez, Andy Samberg, Kevin James, Fran Drescher, Jon Lovitz, Cee Lo Green, Steve Buscemi, Molly Shannon, and David Spade. The film tells a story of Dracula, the owner of Hotel Transylvania, where the world's monsters can take a rest from human civilization. Dracula invites some of the most famous monsters, including Frankenstein's monster, Mummy, a Werewolf family, and the Invisible Man, to celebrate the 118th birthday of his daughter, Mavis. When the hotel is unexpectedly visited by an ordinary young traveler named Jonathan, Dracula must protect Mavis from falling in love with him before it is too late.

Released on September 28, 2012, the film was met with mixed critical reception, while the audience received it very favourably. Despite mixed reviews, Hotel Transylvania set a new record for the highest-grossing September opening weekend, and earned a total of $51.1 million on a budget of $85 million.

Dracula (voiced by Adam Sandler) is the owner and creator of Hotel Transylvania, a five-star resort where the world's monsters can be safe from human civilization. Dracula invites some of the most famous monsters like Frankenstein's Monster (Kevin James) and his wife Eunice (Fran Drescher), Murray the Mummy (Cee Lo Green), Wayne and Wanda Werewolf (Steve Buscemi and Molly Shannon), Griffin the Invisible Man (David Spade), Bigfoot, The Blob, and other monsters to celebrate the 118th birthday of his daughter Mavis (voiced by Selena Gomez). However, Mavis prefers to explore the outside world with her father's permission, but the village he directs her to is actually an elaborate deception to convince her of the threat of humans enough to coax her back.

However, this charade inadvertently attracts the attention of an ordinary young traveler named Jonathan (voiced by Andy Samberg) who was exploring the surrounding forest and he follows the staff to the hotel. Once Jonathan enters the hotel, Dracula frantically attempts to hide him from the patrons such as disguising him as a Flesh Golem named Johhny-stein with the later hasty cover story of being a relative of one of Frank's body parts. Then, Jonathan is discovered by Mavis and company, forcing Dracula to claim he is going to arrange Mavis' birthday party with a young perspective. In doing so, Jonathan manages to liven up the staid activities at the hotel, charming everyone, especially Mavis. Eventually, even Dracula begins to like the human, taking him into his confidence about his family's traumatic past after the vampire notices the young man knows something about them in a respectful manner.

Unfortunately, Chef Quasimodo (Jon Lovitz) realizes Jonathan is human and captures him to cook him, forcing Dracula to directly intervene by magically paralyzing the chef. Eventually, the birthday party happens and it is a raucous success until Dracula overreacts to Mavis and Jonathan's innocent kiss. Things get worse when Chef Quasimodo interrupts the party and reveals Jonathan's true nature. Even as the clientele are revolted, Dracula, in his ranting, lets it slip that he tricked Mavis at the fake village and Mavis is outraged at being manipulated by her own father but still accepts and expresses her desire to be with Jonathan even though he is human. For his part, Jonathan feels obliged to reject Mavis for her father's sake and leaves the hotel. Afterward, Dracula realizes that in his efforts to protect Mavis, he has broken her heart and now she tearfully wants to stay at the hotel forever.

Wishing to undo his mistake, Dracula persuades his friends to help him find Jonathan and even risks his destruction by venturing out in the daylight to do so. Learning that Jonathan is about to board a flight out of Transylvania Airport shortly, they race on and enter a town en route. At that town, Dracula and company are stunned to see the humans celebrating a monster holiday with many humans costumed as the monsters in tribute. To clear a path, Frankenstein tries to scare them, but finds the humans are cheerfully welcoming them instead and even provide a shaded route through the town for Dracula to proceed at maximum speed.

However, Dracula finds that he is too late with Jonathan's plane taking off. With no alternative, Dracula sadly flies after it in broad daylight despite being hurt by the sun. With much effort, Dracula manages to reach the plane and resorts to mind-controlling one of the pilots (Brian Stack) to apologize and tell Jonathan that he wants him to return to be with his daughter. Jonathan accepts Dracula's apology and Dracula manipulates the plane back to the airport. Later, Dracula returns Jonathan to Mavis, who apologizes and explains why he had to reject her and that she is his 'zing'. Dracula gives his blessing to their relationship, Jonathan and Mavis kiss and the hotel has another party to celebrate his daughter's liberating coming of age before Jonathan and Mavis set off on their travels.

The film ends with Dracula and his friends being shown in Traditional animation during the credits.

Besides the principal monster characters, the following monsters appeared in this film:

Hotel Transylvania has been in development since 2006, when Anthony Stacchi and David Feiss were set to direct the film. In 2008, Jill Culton took over the directing position, and around 2010, Chris Jenkins, followed by Todd Wilderman. In 2011, Genndy Tartakovsky had joined Sony as the sixth director to direct his feature directorial debut.

In less than a year, Tartakovsky rewrote the script and reimagined the film to follow the energy, organic-ness and exaggeration of the 2D animation, particularly of the Tex Avery's cartoons. "I took all the aesthetics I like from 2-D and applied them here," Tartakovsky said. "I don't want to do animation to mimic reality. I want to push reality." "I wanted to have an imprint so you'd go, 'Well, only Genndy can make this.' It's hard, especially with CG, but I feel there's a lot of moments that feel that they're very me, so hopefully it'll feel different enough that it has a signature to it."

In November 2011, it was announced that Miley Cyrus would voice Mavis, Dracula's teenage daughter, in February 2012, Cyrus left the film to focus on other projects such as LOL and So Undercover. It was later announced that Selena Gomez would replace Cyrus.

Hotel Transylvania premiered on September 8, 2012, at the Toronto International Film Festival. Distributed by Columbia Pictures, an received a wide release on September 28, 2012.

Hotel Transylvania has received mixed reviews from critics. Review aggregator Rotten Tomatoes reports that 44% of critics gave the film positive reviews, with an average rating of 5.4/10 based on 98 reviews. The site's critical consensus reads: "Hotel Transylvania's buoyant, giddy tone may please children, but it might be a little too loud and thinly-scripted for older audiences." Another review aggregate, Metacritic, calculated an average score of 48 out of 100 based on 30 reviews. CinemaScore polls conducted during the opening weekend revealed that the average grade cinemagoers gave Hotel Transylvania was an A-.

It topped the box office with $11 million on Friday and $43 million domestically and $51.1 million internationally for the weekend, breaking the record for the largest-grossing September opening ever, ahead of Sweet Home Alabama ($35.6 million). It is also the highest grossing debut for Sony Pictures Animation, beating the The Smurfs' opening of $35.6 million.

A social game based on the film, titled Hotel Transylvania Social Game, and made by Sony Pictures Interactive, was released on August 15, 2012. The game allows players to create their own Hotel Transylvania, where they must take care over hotel guests.

Another video game, titled Hotel Transylvania, developed by Way Forward and published by GameMill Entertainment, was released on September 18, 2012, for Nintendo DS and Nintendo 3DS.

A mobile game, titled Hotel Transylvania Dash, developed by Sony Pictures Consumer Products Inc. and PlayFirst, was released to iTunes App Store on September 20, 2012. The game is a variation of Hotel Dash mobile game and features the film's art and characters.

A mobile digital storybook app, titled Hotel Transylvania BooClips Deluxe App, developed by Castle Builders and Sony Pictures Animation, was released to iTunes App Store, Nook Store, Google Play for the Android, iBookstore, Microsoft's Metro, and for the PC and Mac via www.BooClips.com, both in English and in Spanish, on September 20, 2012

Retrieved from "https://movies.fandom.com/wiki/Hotel_Transylvania?oldid=130710"
Community content is available under CC-BY-SA unless otherwise noted.