Start a Wiki
watch 01:48
The Loop (Movies)
Do you like this video?
Hotel Transylvania 2 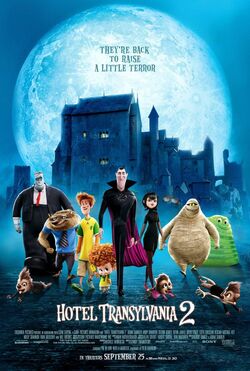 Everything seems to be changing for the better at Hotel Transylvania... Dracula’s rigid monster-only hotel policy has finally relaxed, opening up its doors to human guests. But behind closed coffins, Drac is worried that his adorable half-human, half-vampire grandson, Dennis, isn’t showing signs of being a vampire. So while Mavis is busy visiting her human in-laws with Johnny – and in for a major cultural shock of her own – “Vampa” Drac enlists his friends Frank, Murray, Wayne and Griffin to put Dennis through a “monster-in-training” boot camp. But little do they know that Drac’s grumpy and very old, old, old school dad Vlad is about to pay a family visit to the hotel. And when Vlad finds out that his great-grandson is not a pure blood – and humans are now welcome at Hotel Transylvania – things are going to get batty!

Director Genndy Tartakovsky at the 2015 Annecy International Animated Film Festival[19] Director Genndy Tartakovsky commented about the possibility of the sequel in October 2012, "Everyone is talking about it, but we haven't started writing it. There are a lot of fun ideas we could totally play with. It's a ripe world."[20] On November 9, 2012, it was announced that a sequel had been greenlit, and was scheduled for release on September 25, 2015.[21] On March 12, 2014, it was announced that Tartakovsky would return to direct the sequel, even though he was originally too busy due to his developing an adaptation of Popeye.,[22][23] which would later get shelved.

Music[edit] In March 2015, it was announced that Mark Mothersbaugh, who scored the first film, had signed on to score the sequel.[1]

American girl group Fifth Harmony recorded a song for the film entitled "I'm in Love with a Monster". It was featured in the film's official trailer, and was also played when the film itself was released.[24]

Retrieved from "https://movies.fandom.com/wiki/Hotel_Transylvania_2?oldid=166617"
Community content is available under CC-BY-SA unless otherwise noted.