watch 01:56
The Loop (Movies)
Do you like this video?
Play Sound
How I Live Now 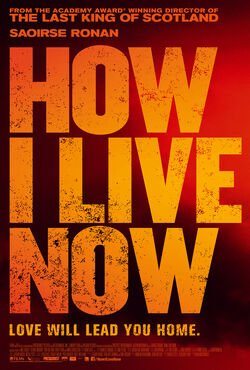 How I Live Now is an 2013 British drama film based on the 2004 novel of same name by Meg Rosoff. The film stars Saoirse Ronan and Tom Holland.

Daisy (Saoirse Ronan) is a neurotic but strong-willed teenager from New York City who gets sent to the English countryside for the summer to stay with her British cousins, Eddie (George MacKay), Isaac (Tom Holland) and Piper (Harley Bird). Despite her initial reservations, Daisy finds herself warming up to the family, and she also falls in love with Edmond, her eldest cousin. With a worsening political situation across the world, their happiness is threatened.

Retrieved from "https://movies.fandom.com/wiki/How_I_Live_Now?oldid=165448"
Community content is available under CC-BY-SA unless otherwise noted.