Start a Wiki
How to Train Your Dragon 2 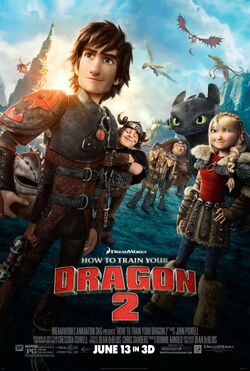 How to Train Your Dragon 2 is a 2014 American 3D computer-animated action family fantasy film produced by DreamWorks Animation[3] and distributed by 20th Century Fox, loosely based on the book series of the same name by Cressida Cowell. It is the sequel to the 2010 computer-animated film How to Train Your Dragon and the second in the trilogy.[4] The film is written and directed by Dean DeBlois, and stars the voices of Jay Baruchel, Gerard Butler, Craig Ferguson, America Ferrera, Jonah Hill, Christopher Mintz-Plasse, T.J. Miller and Kristen Wiig with the addition of Kit Harington, Cate Blanchett and Djimon Hounsou. The film was released on June 13, 2014 to widespread acclaim from both critics and audiences.

The third and final film in the trilogy, How to Train Your Dragon: The Hidden World, was released on February 22, 2019.

Five years after the Viking village of Berk and the dragons made peace, they now live together in harmony. Hiccup goes on adventures with his dragon, Toothless, as they discover and map unexplored lands. Now 20 years old, he is being pressed by his father, Stoick the Vast, to succeed him as chieftain, although Hiccup remains unsure if he is ready for this responsibility.

While investigating a burnt forest, Hiccup and Astrid discover the remains of a fort encased in ice and meet a group of dragon trappers led by Eret, who blames them for his fort's destruction and attempts to capture their dragons for an insane conqueror named Drago Bludvist. The two dragon riders escape and return to Berk to warn Stoick about the dragon army that Drago is amassing. Stoick orders the villagers to fortify the island and prepare for battle. Hiccup, however, refuses to believe that war is inevitable. After Stoick interrupts Hiccup's plan to get Eret to take him to Drago, Stoick explains that he once met Drago at a gathering of chiefs, where Drago, mocked after offering the chiefs his service in return for their servitude, murdered them all using armored dragons, with Stoick as the only survivor. Undeterred, Hiccup flies off with Toothless in search of Drago to try to reason with him.

They run into a dragon rider named Valka, who is revealed to be Hiccup's long-lost mother. She explains that she, like her son, could not bring herself to kill dragons. After being carried off during a dragon raid, she spent 20 years rescuing dragons from Drago's traps and bringing them to an island nest created out of ice by a gigantic Alpha dragon called a "Bewilderbeast", which is able to control smaller dragons. Stoick tracks Hiccup to the nest, where he discovers that his wife is still alive. Meanwhile, Astrid and the other riders kidnap Eret to find Drago, but Drago captures them and learns of Berk's dragons.

Drago and his armada lay siege to the nest, where he reveals that he has his own Bewilderbeast to challenge the Alpha. A battle ensues between the two colossal dragons, which ends with Drago's Bewilderbeast killing its opponent and becoming the new Alpha. Drago's Bewilderbeast then seizes control of all the adult dragons, which hypnotically obey. Hiccup tries to persuade Drago to end the violence, but Drago orders him killed. Toothless, under the Bewilderbeast's influence, approaches Hiccup and launches a blast, but Stoick pushes Hiccup out of the way and is hit instead, dying as a result. The Bewilderbeast momentarily relinquishes control of Toothless, but Hiccup drives him away in a fit of despair. Drago maroons Hiccup and the others on the island and rides Toothless, again under the control of the Bewilderbeast, to lead his army to conquer Berk. Stoick is given a Viking funeral and Hiccup, now having lost both his father and dragon, is unsure what to do. Valka encourages him by telling him that he alone can unite humans and dragons, and inspired by her words and his father's, Hiccup decides to return to Berk to stop Drago.

Afterwards, Berk undergoes repairs while feeling secure knowing that its dragons can defend it.

Retrieved from "https://movies.fandom.com/wiki/How_to_Train_Your_Dragon_2?oldid=178032"
Community content is available under CC-BY-SA unless otherwise noted.