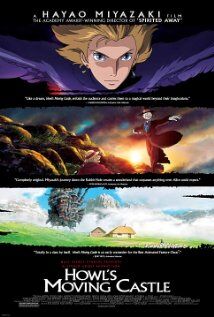 Howl's Moving Castle (ハウルの動く城, Hauru no Ugoku Shiro?) is a 2004 Japanese animated fantasy film written and directed by Hayao Miyazaki of Studio Ghibli and based on Diana Wynne Jones' novel of the same name. Mamoru Hosoda, director of two seasons and one movie from the Digimon series, was originally selected to direct but abruptly left the project, leaving the then retired Miyazaki to take up the director's role.

The film had its world premiere at the Venice Film Festival on September 5, 2004 and was released in Japanese theaters on November 20, 2004. It went on to gross $235,000,000 worldwide, making it one of the most financially successful Japanese films in history. The film was subsequently dubbed into English by Pixar's Peter Docter and distributed in North America by Walt Disney Pictures. It received a limited release in the United States of America and Canada beginning June 10, 2005, was released nationwide in Australia on September 22 and in the United Kingdom the following September.