Edit
watch 01:23
Wiki Targeted (Entertainment)
Do you like this video?
Play Sound
Humanoids from the Deep 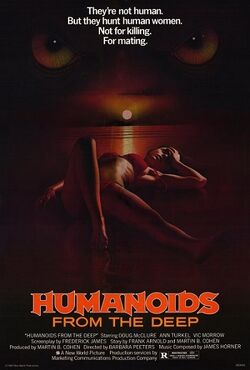 Anglers from the fishing village of Noyo, California catch what appears to be some kind of monster in the netting of their boat. The young son of one of the anglers falls into the water and is dragged under the surface by something unseen. Another angler prepares a flare gun, but he slips and shoots it accidentally into the deck, which is soaked with gasoline dropped earlier by the boy, causing the vessel to burst into flames and then explode; everybody onboard is killed. Jim Hill (McClure) and his wife Carol witness the explosion. Later, Carol's dog goes missing and the two find its dismembered corpse on the nearby beach.

The following night, teenagers Jerry Potter (Meegan King) and Peggy Larson (Lynn Schiller) go for a swim at the beach. Jerry is abruptly pulled under. Peggy believes it is simply a prank until she discovers his horribly mutilated corpse. The screaming girl tries to make it to the beach but she is attacked and dragged onto the sand by a monstrous figure. The humanoid thing tears off her swimsuit and rapes her.

At night, two more teens are on the same beach in a small tent. Billy (David Strassman) is about to have sex with his girlfriend, Becky (Lisa Glaser) when another humanoid monster claws its way inside, brutally kills him and chases the girl onto the beach. She manages to outrun her assailant but then runs straight into the arms of yet another humanoid, which throws her onto the sand and rapes her. More attacks follow, not all of them successful, but few witnesses are left to tell the public about what's happening; only Peggy is found alive, though severely traumatized. Jim's brother is also victimized, prompting Jim to take a personal interest in the matter.

A company called Canco has announced plans to build a huge cannery near Noyo. It turns out that the murderous, sex-hungry mutations are apparently the result of Canco's experimentation with a growth hormone they had earlier administered to salmon. The salmon escaped from the laboratory facilities into the ocean during a storm, and were then eaten by other larger fish that proceeded to mutate into the brutal and depraved humanoids that have begun to terrorize the village.

By the time Jim and Dr. Susan Drake (Turkel), a Canco scientist, have figured out what is going on, it is too late to stop the village's annual carnival from starting. At the carnival, the humanoids show up in droves, relentlessly murdering the men and raping every woman they can grab. Luckily, Jim devises a plan to stop the marauding beasts by spreading gasoline into the bay where the festival is taking place and setting it on fire, cutting off the beasts' way of retreat. Meanwhile Carol is attacked by two of the creatures at home, but manages to defend herself as she kill them before Jim arrives.

The morning after the carnival, everything seems about to return to normal. However, Peggy has survived her sexual assault and is about to give birth when her monstrous offspring suddenly bursts out of her stomach in a fountain of blood. Peggy starts screaming profusely and the baby lets out a screech, just before the screen cuts to black and the film ends.

The movie was originally offered to Joe Dante who turned it down. Barbara Peeters took the job instead, and shooting commenced in October 1979.

Executive producer Roger Corman deemed Peeter’s version of the film lacking in the required exploitation elements needed to satisfy the movie’s intended audience. Corman, in an interview recorded years earlier that can be seen on the 2010 Blu-ray release by Shout Factory, stated that he and director Peeters had discussed what Corman expected of the film as far as B-movie exploitation was concerned, that being to fulfill Corman's maxim that monsters "kill all the men and rape all the women." In post-production, Corman noticed that Peeters had done an outstanding job in filming the "kill" scenes involving male characters, but all of the scenes involving the monsters raping women had been left "shadowy" or had cut away before the attack took place. Second unit director James Sbardellati, who would eventually direct Deathstalker, was brought in to spice up the movie, and it was he who filmed explicit scenes involving the humanoids raping women. These changes were not communicated to most of those who had made the film with the working title Beneath the Darkness, several of whom expressed shock and anger at the released film, its changed title, and the additional nudity and sexual exploitation. After Peeters and Ann Turkel saw the additional sequences they asked for their names to be taken off the movie but were refused, and Turkel made TV talk show appearances castigating Corman for his actions. Several people who went on to bigger and better things worked on the film, including composer James Horner, makeup artist Rob Bottin (who designed the humanoid costumes), editor Mark Goldblatt, and future producer Gale Anne Hurd, who worked as a Production Assistant. The actress who portrays the Salmon Queen (Linda Shayne) later became a film director.

Humanoids from the Deep is a 1980s updating of similarly plotted genre offerings from the 1950s and '60s - Del Tenney's 1964 The Horror of Party Beach in particular - with the addition of lots of graphic violence and nudity. The film was a modest financial success for New World Pictures.

Critical reviews were far from laudatory. Paul Taylor, in Time Out, said, “Despite the sex of the director, a more blatant endorsement of exploitation cinema's current anti-women slant would be hard to find… Peeters also lies on the gore pretty thick amid the usual visceral drive-in hooks and rip-offs from genre hits; and with the humor of an offering like Piranha entirely absent, this turn out to be a nasty piece of work all round." Phil Hardy’s The Aurum Film Encyclopedia: Horror, said, after noting that additional sex and violence scenes had been edited into the film without director Peeter’s knowledge, “…weighed down as it is with solemn musings about ecology and dispossessed Indians, it looks as if it had always been a hopeless case." Nathaniel Thompson, on his Mondo Digital website, observed, “Director Peeters claimed that Roger Corman added some of the more explicit shots of slimy nudity at the last minute to give the film some extra kick, but frankly, the movie needed it. Though competently handled, the lack of visual style, occasionally slow pacing, and peculiar lack of (intentional) humor hinder this from becoming an all-out trash masterpiece…” However, Michael Weldon, writing in his Psychotronic Encyclopedia of Film, opined, “Many were offended by the rape aspect of this fast-paced thriller featuring lots of Creature from the Black Lagoon-inspired monsters…Like it or not, it was a hit and is not dull.”

In 1996, a remake of Humanoids from the Deep was produced for Showtime by Corman's production company, Concorde-New Horizons, starring Robert Carradine and Emma Samms.