watch 01:45
The Loop (Movies)
Do you like this video?
Play Sound
Humphrey Bogart 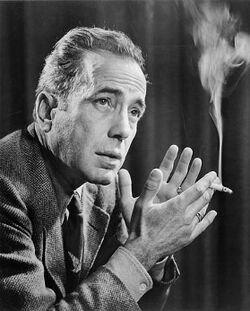 Humphrey DeForest Bogart (December 25, 1899 – January 14, 1957) was an American film and stage actor. His performances in numerous films from the Classical Hollywood era made him a cultural icon. In 1999, the American Film Institute ranked him as the greatest male star of American cinema.

Bogart began acting in Broadway shows after World War I. After the Wall Street Crash of 1929, he began working in films, mostly playing gangsters. He was highly praised for his work in The Petrified Forest (1936). Bogart had originated the role of Duke Mantee in the 1935 Broadway production, but Warner Bros. wanted to cast the then much better known Edward G. Robinson for the film adaptation; however Leslie Howard, who played the protagonist in both the play and the film, insisted on Bogart being given the part. His breakthrough came in 1941 when his performances in High Sierra and The Maltese Falcon made him a star. His first true romantic lead role came in 1942's Casablanca, breaking his typecasting as a gangster. He and Lauren Bacall starred together in To Have and Have Not (1944). After they married, she also played his love interest in The Big Sleep (1946), Dark Passage (1947) and Key Largo (1948). His later notable films include The African Queen, The Caine Mutiny, Sabrina, and The Barefoot Contessa. Bogart won the Academy Award for Best Actor for The African Queen, and was nominated for Casablanca and The Caine Mutiny.

Retrieved from "https://movies.fandom.com/wiki/Humphrey_Bogart?oldid=134174"
Community content is available under CC-BY-SA unless otherwise noted.