Start a Wiki
I, Anna 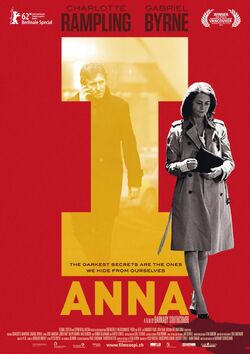 I, Anna is a 2012 noir thriller directed by Barnaby Southcombe and based on Elsa Lewin's novel of the same name. The film shot for 5 weeks in London, and 1 week in a Hamburg studio. Filming wrapped in March 2011.

DCI Bernie Reid's latest case is the mystery of a man brutally murdered in a London apartment building. As an insomniac going through a divorce, Reid's concentration on the case is further complicated after an encounter with Anna, an enigmatic figure. He tracks her down to a party where Anna denies any knowledge of having already met him. Despite her protestations, there is a mutual attraction between them both. Bernie's professional ethics come into question as he grows more attached to Anna, who is about to unveil a dark mystery.


Retrieved from "https://movies.fandom.com/wiki/I,_Anna?oldid=74548"
Community content is available under CC-BY-SA unless otherwise noted.