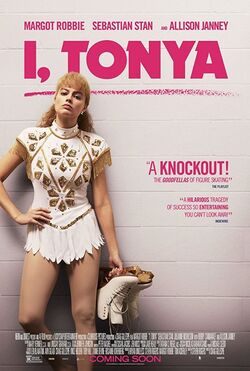 I, Tonya is an American biographical film directed by Craig Gillespie. The film stars Margot Robbie (who also produced the film), Sebastian Stan, and Julianne Nicholson.

In 1970s Portland, Oregon, four year-old Tonya Harding is forced to ice skate by her abusive mother, LaVona. As Tonya grows up, her parents take her out of school to focus on her skating career, and she trains under coach Diane Rawlinson. Tonya rapidly becomes one of the best figure skaters in the United States, but is held back by her "white trash" reputation, home-made costumes and unconventional choice of performance music. At 15, she begins dating 18-year-old Jeff Gillooly, and the two marry, but Jeff becomes abusive. When LaVona scorns Tonya for putting up with it, Tonya blames LaVona for her raising her badly.

After a dispute with Diane, Tonya fires her and hires Dody Teachman as her coach. Tonya becomes the first female figure skater to complete two triple Axel jumps in competition. At the 1992 Winter Olympics, Tonya fails to stick her landings and finishes fourth. Defeated, she moves in again with Jeff and takes a job as a waitress, but Diane convinces her to train for the 1994 Winter Olympics. On the day of her November 1993 competition at the Northwest Pacific Regional Championships in Portland, Tonya receives a death threat and chooses not to compete. In retaliation, Jeff instructs his friend Shawn Eckardt (who says he's Tonya's "bodyguard") to send death threats to Tonya's rival Nancy Kerrigan. Tonya makes a phone call trying to locate Nancy Kerrigan's training arena and her practice times. Eckardt, seeking demand for his own bodyguard business, hires two inept crooks to attack Kerrigan after a practice session in Detroit. On January 6, 1994, Nancy Kerrigan's knee is struck and swollen; she cannot compete at tomorrow's National competition. The hired henchmen are arrested.

Eckardt's bragging quickly leads the FBI to him. He points the finger at Jeff, who is horrified to learn that Eckardt gave orders beyond sending the letters. Tonya qualifies for the Olympic team and is in turn horrified by Jeff, realizing that she will be found guilty by association. She goes to the FBI and tells them what Jeff and Shawn did, but they show her interview transcript to Jeff after his arrest, and he races home to confront her. She briefly speaks to Jeff, then climbs out the window, leaving him for good. Jeff implicates Tonya, saying she knew about the attack.

LaVona visits Tonya and offers her kind words; however, when LaVona asks if Tonya knew anything about the crime, Tonya reaches into LaVona's jacket pocket, finds a tape recorder, and throws her mother out of her home. Jeff, Eckardt, and the henchmen are charged, with Tonya's hearing postponed until after the Olympics. Tonya finishes eighth and Nancy Kerrigan wins the silver medal. Tonya avoids jail but is banned from competitive figure skating for life. Heartbroken, she begs the judge to give her jail time but not to take away the one thing she knows how to do; the judge refuses and tells her his decision is made. Jeff acknowledges with honest regret that he ruined Tonya's career. He changes his name, remarries, opens a hair salon, divorces; he currently lives near Tonya, albeit has no contact with her, with his third wife and two children. LaVona moves to Washington state and has no contact with Tonya. Tonya remarries, divorces, takes up professional boxing, becomes a landscaper, house painter and deck builder. She lives happily with her seven-year-old son and third husband.

Retrieved from "https://movies.fandom.com/wiki/I,_Tonya?oldid=191076"
Community content is available under CC-BY-SA unless otherwise noted.