Start a Wiki
watch 01:48
The Loop (Movies)
Do you like this video?
I Saw the Light 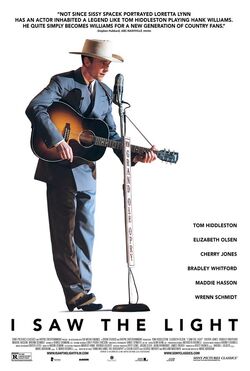 I Saw the Light is a 2015 biographical drama film directed, written, and produced by Marc Abraham, starring Tom Hiddleston as country music legend Hank Williams and Elizabeth Olsen as his first wife, Audrey Williams. It is based on the book Hank Williams: The Biography by Colin Escott, George Merritt, and William (Bill) MacEwen. The film was released theatrically on March 25, 2016.

The story of the country-western singer Hank Williams (Tom Hiddleston), who in his brief life created one of the greatest bodies of work in American music. The film chronicles his rise to fame and its tragic effect on his health and personal life.

Retrieved from "https://movies.fandom.com/wiki/I_Saw_the_Light?oldid=95867"
Community content is available under CC-BY-SA unless otherwise noted.