Start a Wiki
watch 16:45
The Loop (Movies)
Do you like this video?
Ian McShane 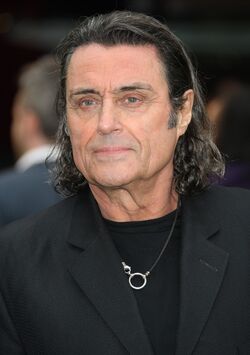 Ian David McShane (born 29 September 1942) is an English actor, voice artist, and comedian. He appeared in films such as Battle of Britain, Sitting Target, The Sexy Beast, Scoop (2006), The Seeker: The Dark Is Rising, The Golden Compass, Pirates of the Caribbean: On Stranger Tides and John Wick. He voiced Captain Hook in Shrek the Third and Tai Lung in Kung Fu Panda.

Ian McShane was born in Blackburn, Lancashire, England, to parents Irene (née Cowley) and Harry McShane. His father was Scottish and his mother was of English and Irish descent. He attended Stretford Grammar School.

Retrieved from "https://movies.fandom.com/wiki/Ian_McShane?oldid=218596"
Community content is available under CC-BY-SA unless otherwise noted.