Start a Wiki
watch 01:27
The Loop (Movies)
Do you like this video?
In the Heart of the Sea 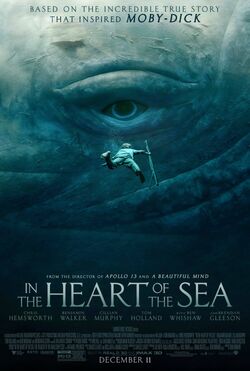 In 1820, the whaling ship Essex is crewed by the Captain George Pollard, Jr., first officer Owen Chase, second officer Matthew Joy, and cabin boy Thomas Nickerson. During their voyage, the ship is sunk when it is rammed and split in half by a very large and enraged bull sperm whale, ultimately leaving its crew shipwrecked at sea for 90 days and more than a thousand miles from land. After the attack, the crew sails for South America and is forced to resort to cannibalism.

Retrieved from "https://movies.fandom.com/wiki/In_the_Heart_of_the_Sea?oldid=165446"
Community content is available under CC-BY-SA unless otherwise noted.