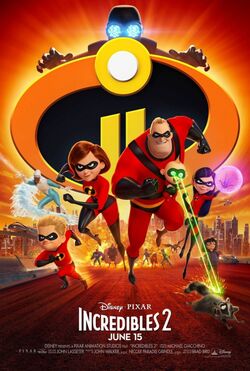 Three months after defeating Syndrome, the Incredibles pursue The Underminer. Although the villain robs the Metroville Bank and escapes, they manage to stop his out-of-control drill from destroying Metroville's City Hall with help from Frozone. However, the amount of collateral damage caused by the incident prompts the government to shut down the Superhero Relocation Program, leaving the Parr family without financial assistance from the head of the program, Rick Dicker. Later, Dicker meets Violet's date, Tony Rydinger, and has his memory wiped after having discovered Violet's superhero identity during The Underminer's attack. That night, Lucius informs Mr. Incredible and Helen of an offer presented to him by Winston Deavor, a superhero fan and the owner of DevTech, a telecommunications corporation. Winston and his sister Evelyn, the genius inventor behind DevTech technology, propose a publicity stunt to regain the public's trust in Supers.

Helen is chosen to spearhead the stunt under her old identity, Elastigirl. Winston provides the Parr family with a new home, and Bob offers to look after the kids while Helen is away. Bob struggles with his new role of a stay-at-home parent: Dash struggles with math, Violet becomes withdrawn after learning that Tony had his memory wiped by Dicker and Jack-Jack displays his various superpowers in an uncontrollable manner, requiring him to be temporarily babysat by Edna Mode, who develops a suit designed to help control his abilities. Meanwhile, whilst on her missions in the city of New Urbem, Elastigirl confronts the Screenslaver, a mysterious supervillain who projects hypnotic images using television screens. She eventually tracks down and captures the villain, who, when unmasked, is revealed to be a pizza delivery man with no recollection of his actions.

At a DevTech party celebrating the Screenslaver's defeat, Winston announces a summit with leaders of various countries to legalize Supers once again, to be hosted on a luxury hydrofoil at sea. Unsettled by the ease with which she captured the Screenslaver, Elastigirl investigates further and realizes that the Screenslaver was being controlled by screens within his goggles. Before she can alert anyone, Evelyn forces the goggles onto her, revealing herself to be the mastermind behind the Screenslaver. Evelyn reveals that her hatred for Supers stems from her father's murder, who was shot by house burglars while trying unsuccessfully to contact his associate, Gazerbeam. Evelyn plans to use the Supers to sabotage her brother's summit and cause a catastrophe that will tarnish the reputation of Supers forever. Using a hypnotized Elastigirl, she lures Mr. Incredible into a trap and forces a pair of goggles onto him, then sends other hypnotized Supers invited to the event to subdue the Parr children. Frozone arrives at the house to protect the children, but is overwhelmed and placed under Evelyn's control as well.

Violet, Dash, and Jack-Jack escape with the help of the Incredibile, a high-tech car once owned by Bob during his time as Mr. Incredible, and reach the Deavors' ship. On board, the hypnotized Mr. Incredible, Elastigirl, and Frozone recite a vindictive manifesto on air to paint Supers as a menace. They subdue the ship's crew members and aim the high-speed ship at New Urbem before destroying the controls. When the Parr children find them, Jack-Jack telekinetically removes the goggles from Elastigirl, who in turn frees Mr. Incredible and Frozone. A battle ensues on the ship in which The Incredibles and Frozone release all the other mind-controlled Supers by destroying their goggles. With Mr. Incredible swimming underwater to turn the rudder and Frozone creating layers of ice, they manage to slow the ship enough to prevent it from crashing into the city. Evelyn tries to escape in a jet but is captured by Elastigirl. Following the incident, Evelyn is arrested, and Supers around the world regain full legal status.

Sometime later, Tony accompanies Violet and her family to see a movie. Outside the theater, the Parrs spot a high-speed pursuit between police and gunmen. Violet leaves Tony at the theater and promises to be back in time for the movie, before the Parrs don their masks, ready to give chase in a refurbished Incredibile.

In a post-credits scene, the subterranean vehicle The Underminer escaped in is seen, foreshadowing his return.

Retrieved from "https://movies.fandom.com/wiki/Incredibles_2?oldid=201041"
Community content is available under CC-BY-SA unless otherwise noted.