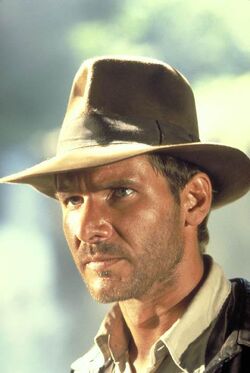 Indiana Jones is a famous screen character from the beloved franchise conceived and conceptualized by film titans Steven Spielberg and George Lucas.

Dr. Henry Walton Jones, Junior was an American archaeologist most famously known as Indiana Jones or Indy. During World War I, he used the name Henri Defense, and went by a number of aliases throughout his life.

He was married at least twice, fathered a son and daughter, and had several grandchildren and great-grandchildren. Throughout his career he found numerous famous mythological artifacts, including the Sankara Stones, the Ark of the Covenant, the Holy Grail, and the Crystal Skull of Akator, which placed him in conflict with different groups across the globe.

Born July 1, 1899 in Princeton, New Jersey, Jones' life was indelibly influenced when he accompanied his parents, Henry Sr. and Anna Jones on a world lecture tour from 1908 to 1910. Throughout his travels, Jones encountered many important figures in history who shaped his outlook on life. After the return home, his mother became ill and died. Father and son relocated to Utah in 1912 but without Anna, their relationship became increasingly strained. As Henry Sr. withdrew into his studies, Indiana found himself in various locations as his father lectured once again.

By 1916, Indiana and his father had moved back to Princeton. While on Spring Break that year, Indiana quit high school, briefly participated in the Mexican Revolution, and spent the next three years fighting in World War I. Afterwards, he attended the University of Chicago, where he studied under Professor Abner Ravenwood, later transferring to France, where he earned an undergraduate degree in linguistics. In 1925, he began a brief relationship with Ravenwood's daughter Marion, which ended his friendship with Abner. Once a graduate, he briefly became an archaeology teacher in London where he met student Deirdre Campbell. Their romance led to marriage in 1926, but a plane crash took Deirdre's life.

In the years leading up to World War II, Jones secured a teaching position at Marshall College. In 1936, the US Government contracted him to find the Ark of the Covenant, which led him to be reunited with Marion Ravenwood. The relationship lasted until Jones left a week before their wedding. During the war, Jones joined the OSS along with girlfriend Sophia Hapgood. The Cold War brought the Soviets into competition as a new world power and Indy found himself the focal point of their quest for Akator. After Soviet agents kidnapped him, he agreed to help his son Mutt Williams rescue his father figure and Indy's colleague Harold Oxley. Indy and Marion were reunited and their reconciliation finally led to marriage.

Jones' lifetime of adventures eventually took its toll, as he lost an eye in the process and was forced to walk with a cane during his later years. By the early 1990s, he was living in the New York City area with his daughter and grandchildren.

Retrieved from "https://movies.fandom.com/wiki/Indiana_Jones?oldid=171666"
Community content is available under CC-BY-SA unless otherwise noted.