Indiana Jones and the Last Crusade

Indiana Jones and the Last Crusade

Indiana Jones and the Last Crusade is a 1989 film directed by Steven Spielberg and starring Harrison Ford, Sean Connery, Denholm Elliott, Julian Glover, Alison Doody, River Phoenix and John Rhys-Davies. This film is the third released, though the twenty-fifth chronologically, in a series of film and TV productions about the adventures of the heroic fictional archaeologist Indiana Jones.

When Dr. Henry Jones Sr. (played by Sean Connery) vanishes while pursuing a life-long search for the Holy Grail, Indiana must retrace his father's steps in the hopes of rescuing him; and the Grail; from the clutches of the Nazi military machine.

Indiana Jones artist Drew Struzan created the film's distinctive artwork. Also like the previous films in the series, the soundtrack was composed by John Williams.

The opening sequence, with River Phoenix as the young Indiana Jones, was shot at the end of production. The rock formations during the opening credits belong to Arches National Park, outside of Moab, Utah. The circus train was shot on the Cumbres & Toltec Scenic Railroad, which runs between Antonito, Colorado and Chama, New Mexico. As the exterior for the fictional Venetian church-turned-library.

After producing the three Indiana Jones movies in the 1980s, no further movies have been made by Lucas or Spielberg in the Indiana Jones series as of 2006. However, a fourth film is currently in pre-production, and is scheduled for a 2007/2008 release.

The film begins in 1912, with young Boy Scout Indiana Jones (River Phoenix) trying to save the Cross of Coronado from grave robbers. This early adventure explains his use of a whip, his fear of snakes, and the scar on his chin (all of which occur aboard a moving circus train), as well as his fedora and overall taste in clothes. The story then segues to 1938, with an adult Indy (Harrison Ford) on the looters' ship, the Coronado, off the Portuguese coast, finally retrieving the Cross and donating it to Marcus Brody's (Elliott) museum.

Later, he is summoned to meet the wealthy Walter Donovan (Glover), who informs him that his father, Henry Jones Sr. (Connery), vanished while searching for the missing half of a clue to the location of the Holy Grail, which has the power to grant eternal life. Indy and Marcus travel to Venice to meet Dr. Elsa Schneider (Doody) to retrace his father's footsteps. Inside the library where his father was last seen, Indy finds that an "X" (inlaid in the floor) literally marks the spot. When he smashes through the floor, he finds ancient catacombs, in particular the tomb of Sir Richard, a knight of the First Crusade, which holds information needed to find the Grail. Indy is chased by six members of The Brotherhood of the Cruciform Sword, a secret and fanatical religious cult that protects the Grail. In a motorboat chase by the nearby dock, Indy kills all except the leader, Kazim (Kevork Malikyan). After Jones convinces Kazim that he is looking for his father, not the Grail, Kazim tells him that his father is being held in Castle Brunwald near the border between Austria and Germany.

Indiana finds his father, but they are betrayed by Schneider and Donovan, who are working with the Nazis. His father's kidnapping had been staged to get him to solve the mystery of the Grail for them. Indy and his father escape and go to Berlin, to retrieve his father's diary, which contains all that Professor Jones has learned about the Grail. Meanwhile, the Nazis capture Brody in Iskenderun, Turkey, and learn the starting point for the quest.

Donovan and Schneider take Brody with them, and are tracked down by Indy, his father and Sallah (Rhys-Davies), bent on rescuing their friend. Eventually their paths cross and lead to a confrontation, which also involves Kazim and his men. Kazim and his men attempt to stop the Nazi caravan, but outgunned and outnumbered, they are killed by Donovan's men. Indy's father attempts to rescue Brody from the tank, but is himself captured and put in the tank with Brody. Indy jumps onto the tank and rescues the captives. Donovan's aide, Colonel Vogel (Michael Byrne), is killed when the tank drives off a cliff with him still in it.

The quest reaches its climax at the Canyon of the Crescent Moon, in Hatay near Iskenderun, the site of temple housing the Grail. Donovan captures Indy in the temple and shoots his father, forcing him to retrieve the Grail to use its healing powers to save Professor Jones' life. Indy, guided by the diary, circumvents the deadly booby traps, reaching a room where a knight of the First Crusade, kept alive by the power of the Grail, has hidden it amongst many false cups. Donovan and Schneider follow. Schneider identifies a golden, bejeweled cup as the Grail and Donovan impatiently drinks from it. It turns out to be her way of ridding herself of a rival for the Grail; Donovan dies in a very grotesque manner, aging rapidly into dust.

Indy picks out the true Grail, a plain cup with a gold interior, worthy of a humble carpenter, and proves it by drinking from it without harm. The knight tells him not to let the Grail go "past the Great Seal" inscribed at the entrance. Indy fills the Grail with water and uses it to heal his father. Schneider then tries to leave with the Grail and crosses the Great Seal. The building starts to collapse and she loses her balance at the edge of a newly-formed crevasse. Indy grabs her hand, but she greedily reaches for the Grail, tantalizingly just out of reach, with the other and falls into the abyss. Then Indy loses his footing and finds himself in the same situation, with Professor Jones keeping him from following Schneider. He also tries to get the Grail, but his father tells him to "let it go" and he reluctantly obeys. The Grail is lost forever as they escape the crumbling temple. Indiana Jones and the Last Crusade ends with Henry Sr. revealing that "Indiana" was the family dog's name; Indy, his father, Sallah and Marcus then ride off into the sunset.

Indiana Jones and the Last Crusade received very positive reviews from critics, On Rotten Tomatoes, The film has a score of 87% based on 71 reviews with an average score of 7.91/10.

This installment in the Indiana Jones series has more humor than the previous two films. The humor is mainly shown through the relationship between Indiana and his father. Also Marcus Brody is a less serious character than his previous appearance in Indiana Jones and the Raiders of the Lost Ark, being described as a museum curator who "once got lost in his own museum". The lightheartedness of the movie especially contrasts to its predecessor Temple of Doom, which is usually cited as the "darkest" in the trilogy. Despite being regarded as some to be derivative of the original film, it is often regarded as the second best of the trilogy, and sometimes, the best.

In 1989, Lucasfilm Games released both a graphical adventure game and an action game of the same name, based on the film. In its era, the adventure game is generally considered one of the best of its genre, right along with Maniac Mansion, The Secret of Monkey Island, and Indiana Jones and the Fate of Atlantis. There are also two completely different games for the NES called "Indiana Jones and the Last Crusade", with no subtitle to differentiate the two versions. The newer game of that title is a port of the action game, while the older game was a different action game. There was also an Indiana Jones and the Last Crusade game released for Game Boy and Game Gear. Lucasfilm games are also currently producing a new Indiana Jones game for the next-generation games consoles, PlayStation 3, and Xbox 360. 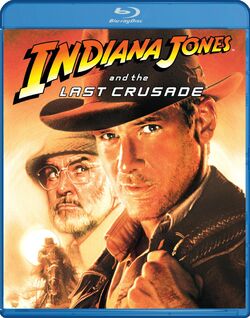 Under the supervision of director Steven Spielberg and sound designer Ben Burtt, the three original Indiana Jones films were remastered in 2012 and made available in stores on November 19th, 2013. The HD restoration of included:

Wikiquote has a collection of quotations from or about:
Indiana Jones and the Last Crusade
Deutsch Español Français 日本語 Norsk Polski Русский
Community content is available under CC-BY-SA unless otherwise noted.
Advertisement