Indiana Jones and the Temple of Doom

Indiana Jones
and the Temple of Doom

Indiana Jones and the Temple of Doom is a 1984 action/adventure film directed by Steven Spielberg. First released on May 23, 1984, it is a prequel to the hugely successful action movie Raiders of the Lost Ark. This film is the second released, though the twenty-third chronologically, in a series of film and TV productions about the adventures of the heroic fictional archaeologist Indiana Jones.

Like the first, it starred Harrison Ford as Jones, was directed by Steven Spielberg and based on an original story by George Lucas. Many members of the original crew returned, including cinematographer Douglas Slocombe, editor Michael Kahn and composer John Williams. The film is darker in tone than its predecessor. The film was always intended to be a horror movie as well as a remake of elements of Gunga Din (1939).

Besides Ford, the actors included Kate Capshaw (Spielberg's second wife, whom he first met while casting this film), Ke Huy Quan, Amrish Puri, Roy Chiao as Lao Che, and a cameo by Dan Aykroyd. Indiana Jones artist Drew Struzan created the film's distinctive artwork. Most of the filming was done on location in Sri Lanka and at Borehamwood Studios in Hertfordshire, England.

Indiana Jones and the Temple of Doom received positive reviews from critics, On Rotten Tomatoes, The film has a score of 85% based on 68 reviews with an average score of 7.22/10.

Some fairly gruesome scenes in Temple of Doom, as well as, but to a lesser extent, other PG-rated films of the time such as Gremlins caused a significant public outcry. Spielberg spoke to the MPAA about creating a new rating that would cover the middle ground between a clear PG and a clear R that his films often found themselves on. This led to the creation of a new rating category: PG-13. (See: History of the MPAA film rating system) Some reviewers also commented about the alleged film's racism in depicting eastern culture.

The movie was also banned in India at the time after the film was accused of having a "racist portrayal of Indians and overt imperialistic tendencies".[1]

The film won an Academy Award for Visual Effects. Indeed, both Lucas and Spielberg have stated that Temple of Doom was focused on effects to a higher degree than either Raiders of the Lost Ark or Indiana Jones and the Last Crusade.

The film is set in 1935 — a year before Raiders of the Lost Ark. The film opens with Indiana Jones in a Shanghai nightclub attempting to trade the remains of Nurhaci for a large diamond (possibly "The Peacock's Eye"[2]) with a gangster named Lao Che. When the deal goes bad, Indy and the club's singer Willie escape the pursuing criminals in a car driven by a 7 year old boy named Short Round, an ally of Indy. They board a cargo plane not knowing that it is owned by Lao Che.

As Indy, Willie, and Short Round nap during the flight, the pilots dump the fuel and parachute out of the plane. Indy and the others use an emergency raft to safely descend from the plane's altitude, eventually arriving near a village in India. The people there enlist his help in retrieving a sacred stone, the Sankara stone or the Siva linga, and the community's children from the forces of an evil palace nearby.

Initially the palace seems normal enough; they act insulted by his questions about the village's claims. Indy is later attacked in his room by an assassin, which leads him to find a secret door in Willie's room. Beneath the palace is a vast underground chamber where the village rock and two more are held by Thuggees. An evil cult (who worship the goddess Kali with human sacrifice) uses the village's children to dig for the remaining rocks within the mines of the palace in the hope that with all of them they can rule the world. The cult is led by the villainous cult leader Mola Ram (Amrish Puri).

Indy, Willie, and Short Round are captured by the Thuggee and separated: Indy sides with the Thuggee after being forced to drink the "blood of Kali Ma", Willie is kept as a human sacrifice, and Short Round is put in the mines alongside the village children. Short Round escapes and helps Indy return to his normal self, which allows him to save Willie, take the Sankara stones, and free the children. In the fight to escape the palace, Indy and company make it outside, but trapped on a rope bridge with the Thuggee on both sides. Taking a desperate gamble with a warning in Chinese to his friends to brace themselves, Indy cuts the bridge in half leaving Mola Ram and a few of his minions on the heroes' side. Eventually, Mola Ram fights for the stones, but Indy invokes the magic of the stone and causes Mola Ram and all but one of the stones to fall into the river where the nefarious priest is devoured by crocodiles. Just at that moment, British troops appear to subdue the Thugs.

The heroes triumphantly return to the village with their sacred stone and their children.

Indiana Jones And The Temple Of Doom: The Original Motion Picture Soundtrack

The album is currently out of print and is no longer available. Due to the short nature of the soundtrack (approximately 45 minutes), numerous cues from the film were cut. After the production of the extended Raiders of the Lost Ark soundtrack, there was some hope that the future might hold a more complete release of the Temple of Doom score. As of 2006, this has not come to fruition. 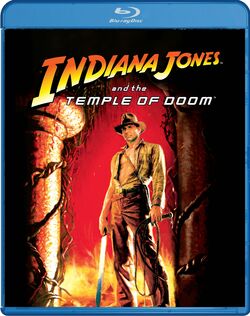 The film was released on VHS in the 1990s and then on DVD in October 2003, digitally remastered. It was packaged with the previous and later films in the series. However, the Region 2 version of the film was heavily censored. The BBFC says that this was because they didn't get Spielberg's permission to restore the edited footage, which includes more violence and gore.

Under the supervision of director Steven Spielberg and sound designer Ben Burtt, the three original Indiana Jones films were remastered in 2012 and made available in stores on November 19th, 2013. The HD restoration of included: