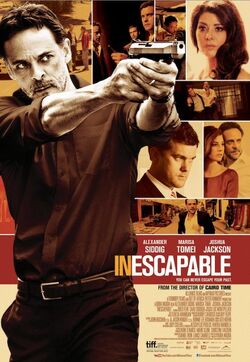 One afternoon, on a typical day at work, Adib is confronted with devastating news: His eldest daughter, Muna, has gone missing in Damascus. Now Adib, who has not been back in over 30 years, must return to Syria and deal with his secret past in order to find her. Inescapable is a thriller about a father's desperate search for his daughter and the chaos of the Middle East he left behind.

Retrieved from "https://movies.fandom.com/wiki/Inescapable?oldid=74551"
Community content is available under CC-BY-SA unless otherwise noted.