Start a Wiki
watch 01:38
The Loop (Movies)
Do you like this video?
Inferno 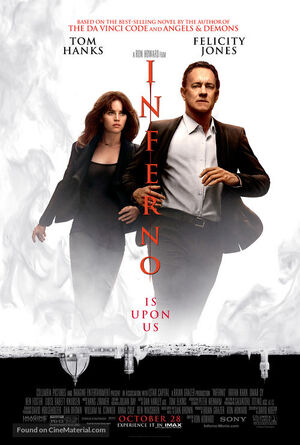 Inferno is a 2016 mystery thriller film directed by Ron Howard and written by David Koepp and is based on the 2013 novel Inferno.

Famous symbologist Robert Langdon (Tom Hanks) follows a trail of clues tied to Dante, the great medieval poet. When Langdon wakes up in an Italian hospital with amnesia, he teams up with Sienna Brooks (Felicity Jones), a doctor he hopes will help him recover his memories. Together, they race across Europe and against the clock to stop a madman (Ben Foster) from unleashing a virus that could wipe out half of the world's population.

Retrieved from "https://movies.fandom.com/wiki/Inferno?oldid=113318"
Community content is available under CC-BY-SA unless otherwise noted.