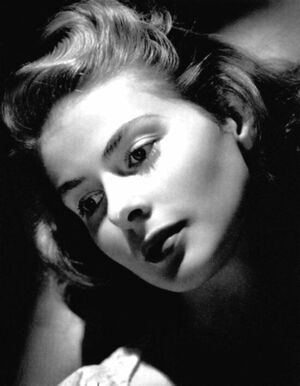 Ingrid Bergman was an Academy-Award winning Swedish actress who was one of the first "Hitchcock Blondes". She was one of Alfred Hitchcock's favorite actresses before she left Hollywood to marry director Roberto Rossellini.

Today she is probably best-remembered for her lead role in the wartime classic, Casablanca. She is the mother of actress Isabella Rossellini.

Ingrid Bergman died of breast cancer the day after her 67th birthday.

Retrieved from "https://movies.fandom.com/wiki/Ingrid_Bergman?oldid=28909"
Community content is available under CC-BY-SA unless otherwise noted.