watch 00:59
The Loop (Movies)
Do you like this video?
Inside Out 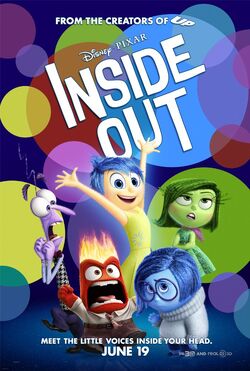 Inside Out is a 2015 American 3D computer-animated fantasy comedy film produced by Pixar Animation Studios and released by Walt Disney Pictures. The film is based on an original idea by Pete Docter, who is directing the film along with co-director Ronnie del Carmen, and producer Jonas Rivera. It is was released on June 19, 2015. The film is set in the head of a young girl, Riley Anderson, where five emotions—Joy, Anger, Disgust, Fear and Sadness—try to lead the girl through her life.

A girl named Riley Andersen is born in Minnesota and within her mind, five personifications of her basic emotions — Joy, Sadness, Fear, Disgust, and Anger — gradually come to life. As Riley grows up, her emotions influence her actions via a control console in her mind's Headquarters. Her memories are stored in colored orbs, which are sent into long-term memory each night via a suction tube. The most important "core memories" are housed in a hub and power five "islands," each reflecting a different aspect of her personality. Joy acts as the emotions' leader to keep Riley happy, Fear protects her from danger, Disgust guards her health and social status, and Anger ensures that she is treated fairly, but since none of them understand Sadness's purpose (even Sadness herself), Joy tries to steer her away from the console.

When Riley is 11 years old, she and her parents move to San Francisco. She is disappointed by their new home (photo link) and other difficulties: the moving van with all their belongings gets lost, and her father is under stress due to his struggling business. When Sadness begins touching Riley's happy memories, turning them sad, Joy tries to guard them by keeping her isolated. On Riley's first day at her new school, Sadness causes her to cry in front of her class, creating a sad core memory. Joy tries to dispose of it before it reaches the hub, but instead knocks the other core memories loose during a struggle with Sadness, depowering the personality islands and rendering them unstable. Joy and Sadness are sucked into the memory tube and taken to the maze-like storage area of long-term memory, taking the core memories with them.

With Joy and Sadness gone, Anger, Fear, and Disgust try to maintain Riley's emotional state, but only end up unintentionally distancing her from her parents, friends and hobbies, making her personality islands gradually crumble and fall, one by one, into the "Memory Dump," an abyss where memories are forgotten. Finally, Anger inserts an idea into the console, prompting Riley to run away, believing the only way she can be happy again is to go back to Minnesota.

Meanwhile, Joy and Sadness encounter Bing Bong, Riley's childhood imaginary friend. He tells them they can get to Headquarters by riding the train of thought. After chasing the train through Riley's mind, the three eventually catch the train, but it is derailed when one of the personality islands collapses when Riley steals a credit card from her mother's purse. Joy and Sadness find out that Riley is running away and become distraught.

In desperation, Joy abandons Sadness and attempts to ride a "recall tube" back to Headquarters, but a piece of a personality island collapses, breaking the tube and plunging Joy and Bing Bong into the Memory Dump. While despairingly looking through fading memories, Joy cries and begins to lose hope, then discovers a sad memory of a hockey game that becomes happy when Riley's parents and friends comfort her, causing her to finally realize Sadness' purpose: to alert others when Riley is emotionally overwhelmed and needs help.

Joy and Bing Bong try to use Bing Bong's old wagon rocket to escape the Memory Dump, but after several tries, Bing Bong realizes their combined weight is too much and on the third attempt, jumps out and fades away, sacrificing himself to allow Joy to escape. Joy then uses various tools from around Riley's mind to propel herself and a despondent and unwilling Sadness through the air to Headquarters, to discover that Anger's idea has disabled the console, rendering Riley depressed and apathetic. To the surprise of the others, Sadness (at Joy's insistence) takes control and extracts the idea, reactivating the console and prompting Riley to return home.

As Sadness reinstalls the core memories, Riley arrives home and bursts into tears, confessing that she misses her old life. As her parents reassure and comfort her, Joy and Sadness work the console together, creating a new core memory that combines their emotions, which restores one of the personality islands in a new and upgraded form. One year later, Riley has fully adapted to her new home, made new friends, returned to her old hobbies, and adopted a few new ones (fueled by new, more nuanced core memories). On the inside, her emotions take their place at a new, larger console that allows them to work together, enabling Riley, now 12 years old, to lead a more emotionally complex life.

Pixar first revealed the following information on the upcoming film at D23 Expo 2011: "From director Pete Docter comes an inventive new film that explores a world that everyone knows, but no one has seen: inside the human mind." It was also reported that Michael Arndt is writing the screenplay.

In an interview with Charlie Rose in early December 2011, John Lasseter gave details about the film: "It takes place in a girl's mind, and is about her emotions as characters."

In June 2012, he made a similar statement to Bleeding Cool, and gave further details:

Pete [Docter] has this way of constantly trying to figure out something that we’re all familiar with in some way... he's constantly looking for these kinds of things. You look at people oftentimes and they do something to make you go "What are they thinking?" or it's like how a song gets stuck in your head and you just can't get it out. Little quirky things like this that we all do. Certain emotions just seem to take us over, anger or happiness, where you start giggling and laughing and you can't stop. He thought "I want to take a look at that, explain that." His idea is that the emotions of this little girl are the characters and it takes place in the head of this little girl, and shows how they control things that go on. It's very, very clever and it's truly unlike anything you've ever seen, yet it explains things you've seen.

At the 2013 SIGGRAPH convention, Docter gave The Hollywood Reporter some details on the film. He said the story was "one of the most challenging I've ever had to put together", because the film has to tell simultaneously what is happening to the girl and what is happening inside her mind.

He gave details on the design of the characters: "The characters are created with this energy because we are trying to represent what emotions would look like. They are made up of particles that actually move. Instead of being skin and solid, it is a massive collection of energy."

Bleeding Cool published an article stating the title of Docter's next film would be The Inside Out. Then on February 8, 2013, ComingSoon.net reported that the film’s title would be Inside Out. Disney/Pixar officially announced the title on Twitter on April 17, 2013 during Cinema Con. On August 9, 2013, at the D23 Expo it was announced that Amy Poehler, Lewis Black, Mindy Kaling, Bill Harder and Phyllis Smith had joined the cast of the film.

On May 25, 2014, it was announced that Michael Giacchino would be composing the music for the film, marking his second collaboration with Docter following Up.

On June 19, 2014, Pixar gave LA jour­nal­ists an early sneak pre­view of Lava,  a short slated to accompany Inside Out in its initial theatrical release. The musi­cal love story is directed by James Ford Mur­phy, and pro­duced by Andrea War­ren. The story was inspired by the iso­lated beauty of trop­i­cal islands and the explo­sive allure of ocean vol­ca­noes, and is a musi­cal love story that takes place over mil­lions of years.

Retrieved from "https://movies.fandom.com/wiki/Inside_Out_(2015)?oldid=262801"
Community content is available under CC-BY-SA unless otherwise noted.