watch 03:27
Wiki Targeted (Entertainment)
Do you like this video?
Play Sound
Insomnia 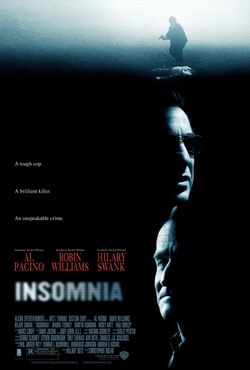 A veteran police detective (Al Pacino) is sent to a small Alaskan town to investigate the murder of a teenage girl. Forced into a psychological game of cat-and-mouse by the primary suspect (Robin Williams), events escalate and the detective finds his own stability dangerously threatened.

Retrieved from "https://movies.fandom.com/wiki/Insomnia?oldid=287573"
Community content is available under CC-BY-SA unless otherwise noted.