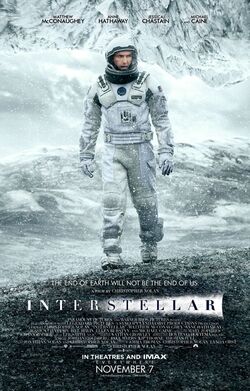 Interstellar is a 2014 American science fiction film directed, co-written, and co-produced by Christopher Nolan and starring Matthew McConaughey, Anne Hathaway, Jessica Chastain, Bill Irwin, Ellen Burstyn, and Michael Caine. Nolan combined his idea with an existing script by his brother Jonathan Nolan that was developed in 2007 for Paramount Pictures and producer Lynda Obst. Nolan is producing the film with Obst and Emma Thomas.

In the near future, crop blight has caused civilization to regress into a failing agrarian society. Former NASA pilot Cooper runs a farm with his family. Murph, Cooper's 10-year-old daughter, believes her room is haunted by a poltergeist trying to communicate with her. They come across a malfunctioning Indian unmanned aerial vehicle that they salvage for spare parts. They soon discover that Murphy's "ghost" is an unknown intelligence sending coded messages using gravitational waves, leaving binary coordinates in the dust that direct them to a secret NASA installation led by Professor John Brand. Brand reveals that a wormhole, apparently created by an alien intelligence, has opened near Saturn and leads to new planets in another galaxy that may offer hope for survival. NASA's "Lazarus missions" have identified three potentially habitable worlds orbiting a supermassive black hole named Gargantua: Miller, Edmunds, and Mann, named after the astronauts who surveyed them. Brand recruits Cooper to pilot the spacecraft Endurance to recover the astronauts' data; if one of the planets is habitable, humanity will follow on space stations. Cooper's departure devastates Murph, and they part on bad terms.

On Endurance, Cooper joins Brand's daughter, biotechnologist Amelia; scientists Romilly and Doyle; and robots TARS and CASE. They travel to Saturn and enter the wormhole, heading to Miller, but they discover that the planet is so close to Gargantua that it experiences severe gravitational time dilation; each hour on the surface is seven years on Earth. A team descends to the planet, which proves inhospitable as it is covered by a shallow ocean roiled by enormous tidal waves. As Amelia attempts to recover Miller's data, a wave hits, killing Doyle and delaying the shuttle's departure. When Cooper and Brand returned to the Endurance, 23 years have already passed.

On Earth, the adult Murph is now a NASA scientist helping Brand with an equation that will enable NASA to launch the space stations via gravity. With his last breath, Brand admits he already solved the problem and determined the project is impossible. He concealed his findings to keep hope alive and put his faith in "Plan B": using frozen embryos aboard the Endurance to start humanity anew. However, Murph concludes that Brand's equation could work with additional data from a black hole's singularity.

Low on fuel, Endurance can only visit one more planet before returning to Earth. After a tense vote, the team selects Mann's planet, as Mann is still transmitting. However, they discover it is perpetually cold, covered with glaciers, and inhospitable. Mann, who always knew Plan B was the mission's true goal, faked data about his planet's viability so Endurance would rescue him. Mann breaks Cooper's spacesuit visor and leaves him to die, and flees to Endurance on a shuttle; Romilly is killed by a bomb Mann set to protect his secret. Amelia rescues Cooper using the other cargo shuttle, and they arrive at Endurance in time to witness Mann docking improperly. The airlock explodes, killing Mann and causing serious damage, but Cooper uses the cargo shuttle to get Endurance under control.

Nearly out of fuel, Cooper and Amelia plan to slingshot Endurance around Gargantua on a course toward Edmunds on the other side of the black hole while 51 years will pass on Earth. TARS and Cooper detach their shuttles into the black hole, sacrificing themselves to collect data on the singularity and to propel Amelia and CASE by dropping the ship's mass. They emerge in a five-dimensional location, where time appears as a spatial dimension and using gravitational waves, Cooper encodes TARS's data on the singularity into the young Murphy's watch through Morse code. Decades later she realizes that a message was encoded onto the watch which allows her to complete Brand's equation to launch the space stations.

Once the data is transmitted, the five-dimensional area collapses and Cooper finds himself traveling through the wormhole, coming into orbit around Saturn. He awakens aboard a NASA space station and tearfully reunites with the now elderly Murph, who has led humanity's exodus. Satisfied that Cooper has kept his promise to one day come back for her, Murph convinces Cooper to search for Amelia, who is alone and implementing Plan B with CASE on Edmunds' desert, hospitable planet. Edmunds has died, possibly from old age due to it being at least 84 years since he landed. Cooper and TARS, who was also rescued from space, steal a NASA shuttle to travel to Edmunds' Planet.

Http://video.wikia.com/wiki/File:Beyond the World of Interstellar

Interstellar received generally positive reviews from critics and widespread acclaim from fans. It has a score of 72% on review aggregator website Rotten Tomatoes based on 344 reviews, with a rating average of 7.06 out of 10. The site's critical consensus reads: "Interstellar represents more of the thrilling, thought-provoking, and visually resplendent film-making moviegoers have come to expect from writer-director Christopher Nolan, even if its intellectual reach somewhat exceeds its grasp." On Metacritic, another review aggregator, the film has a score of 74 out of 100 on based on 46 critics, indicating "generally favorable reviews".