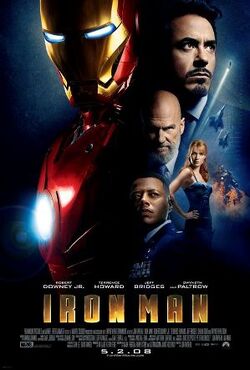 Iron Man is a 2008 American science fiction superhero film based on the Marvel Comics character of the same name. It is the first installment in the Marvel Cinematic Universe.

The film was both critically and commercially successful, grossing over $585 million worldwide.

Playboy, philanthropist and genius Tony Stark, who has inherited the defense contractor Stark Industries from his father, is in war-torn Afghanistan with his friend and military liaison, Lieutenant Colonel James Rhodes to demonstrate the new "Jericho" missile. The convoy is ambushed and Stark is critically wounded by one of his own missiles; he is captured and imprisoned in a cave by the terrorist group the Ten Rings. An electromagnet grafted into Stark's chest by fellow captive Yinsen keeps the shrapnel shell shards that wounded him from reaching his heart and killing him. Ten Rings leader Raza offers Stark freedom in exchange for building a Jericho missile for the group, but Tony and Yinsen agree Raza will not keep his word.

Stark and Yinsen secretly build a powerful electric generator called an arc reactor, to power Stark's electromagnet, and then begin to secretly build a suit of armor powered by the reactor, to escape. Although they keep the suit hidden almost to completion, the Ten Rings attack the workshop when they discover their intentions. Yinsen sacrifices himself to divert them while the suit powers up. The armored Stark battles his way out of the cave to find the dying Yinsen, then an enraged Stark burns the Ten Rings weapons and flies away, only to crash in the desert, destroying the suit. After being later rescued by Rhodes, Stark returns home and announces that his company will no longer manufacture weapons. Obadiah Stane, his father's old partner and the company's manager, advises Stark that this may ruin Stark Industries and his father's legacy. In his home workshop, Stark builds an improved version of his suit, as well as a more powerful arc reactor for his chest. Pepper places the original reactor inside a small glass showcase. Stane requests details but Stark keeps his work to himself.

At a charity event held by Stark Industries, reporter Christine Everhart informs Stark that his company's weapons, including the Jericho, were recently delivered to the Ten Rings and are being used to attack Yinsen's home village, Gulmira. Stark also learns Stane is trying to replace him as head of the company. Enraged, Stark dons his new armor and flies to Afghanistan, where he saves Yinsen's village and delivers a devastating blow to the Ten Rings. While flying home, Stark is shot at by two F-22 Raptor fighter jets. He phones Rhodes and reveals his secret identity in an attempt to end the attack. Meanwhile, the Ten Rings gather the pieces of Stark's prototype suit and meet with Stane, who subdues Raza with a sonic device and has the rest of the group eliminated. He has a new suit reverse engineered from the wreckage. Seeking to find any other weapons delivered to the Ten Rings, Stark sends assistant Virginia "Pepper" Potts to hack into the company computer system from Stane's office. She discovers Stane has been supplying the terrorists and hired the Ten Rings to kill Stark, but the group reneged. Potts meets with Agent Phil Coulson of the "Strategic Homeland Intervention, Enforcement and Logistics Division", a counter-terrorism agency, to inform him of Stane's activities.

Stane's scientists cannot duplicate Stark's arc reactor so Stane ambushes Stark at home, using his sonic device to paralyze him, and takes his arc reactor. Left to die, Stark manages to crawl to his lab, break the showcase and plug in his original reactor. Potts and several S.H.I.E.L.D. agents attempt to arrest Stane, but he dons his suit and attacks them. Stark fights Stane, but is outmatched without his new reactor to run his suit at full capacity. Stark lures Stane atop the Stark Industries building and instructs Potts to overload the large arc reactor there. This unleashes a massive electrical surge that knocks Stane unconscious, causing him and his armor to fall into the exploding reactor, killing him.

The next day, the press has dubbed the armored hero "Iron Man". Agent Coulson gives Stark a cover story to explain the events of the night and Stane's death. At a press conference, Stark begins giving the cover story, but then announces he is Iron Man.

In a post-credits scene, S.H.I.E.L.D. Director Nick Fury visits Stark at home, and, noting Iron Man is not "the only superhero in the world", says he wants to discuss the "Avengers Initiative".

The film received critical acclaim, receiving an approval rating of 93% from Rotten Romatoes based on 266 reviews, with an average score of 7.7/10. Metacritic gave a score of 79 based on 38 reviews. Downey's portrayal of Tony Stark received praise by many critics. 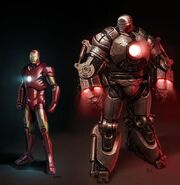 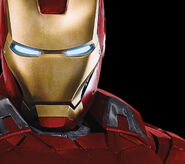 Director, Jon Favreau
Add a photo to this gallery 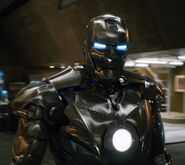