watch 02:03
Wiki Targeted (Entertainment)
Do you like this video?
Play Sound
Iron Man 2 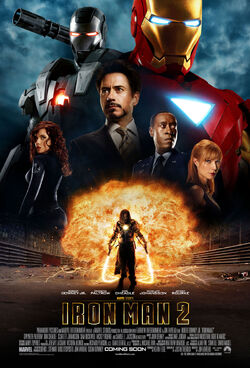 Iron Man 2 is a 2010 American superhero film based on the Marvel Comics character Iron Man. It is the sequel to 2008's Iron Man, and is the third film released as part of the Marvel Cinematic Universe. Directed by Jon Favreau and written by Justin Theroux, the film stars Robert Downey, Jr., Gwyneth Paltrow, Don Cheadle, Scarlett Johansson, Sam Rockwell, Mickey Rourke, and Samuel L. Jackson. Set six months after the events of Iron Man, Tony Stark has revealed his identity as Iron Man and is resisting calls by the United States government to hand over the technology. Meanwhile, rogue Russian scientist Ivan Vanko has developed the same technology and built weapons of his own in order to pursue a vendetta against the Stark family, in the process joining forces with Stark's business rival, Justin Hammer.

Following the successful release of Iron Man in May 2008, Marvel Studios announced and immediately set to work on producing a sequel. In July of that same year Theroux was hired to write the script, and Favreau was signed to return and direct. Downey, Paltrow and Jackson were set to reprise their roles from Iron Man, while Cheadle was brought in to replace Terrence Howard in the role of James Rhodes. In the early months of 2009, Rourke, Rockwell and Johansson filled out the supporting cast, and the film went into production that summer. Like its predecessor the film was shot mostly in California, except for a key sequence in Monaco.

Iron Man 2 premiered in Los Angeles, California on April 26, 2010, and was released in 54 countries between April 28 and 30 before going into general release in the U.S. on May 7, 2010. The film was a critical and commercial success, grossing $623.9 million at the worldwide box office. The DVD and Blu-ray were released on September 28, 2010. The third installment of the Iron Man series, Iron Man 3, was released on May 3, 2013.

In Russia, the news media covers Tony Stark's disclosure of his identity as Iron Man. Ivan Vanko, whose father Anton Vanko has just died, sees this and begins building an arc reactor similar to Stark's.

Six months later, Stark has used his armor to help maintain world peace. He re-institutes the Stark Expo in Flushing Meadows to continue his father Howard's legacy. Senator Stern demands that Stark turn over the Iron Man technology to the government. Stark refuses, claiming that foreign nations and business competitors are decades away from recreating his work, and that it is his property.

The palladium core in the arc reactor that keeps Stark alive and powers the armor is slowly poisoning him, and he has failed to find a substitute. Growing increasingly despondent and reckless due to his impending death, and choosing not to tell anyone about his condition, Stark appoints his personal assistant Pepper Potts CEO of Stark Industries, and hires Stark employee Natalie Rushman to replace her as his personal assistant.

While Stark is racing at the Circuit de Monaco, he is attacked by Vanko, who uses his arc reactor to power whip-like energy weapons. Stark defeats Vanko with the aid of his portable briefcase armor, and learns that Vanko is the son of his father's old partner, Anton Vanko, who had collaborated with Howard on the first arc reactor. Anton was deported to his native Soviet Union following attempts to profit from the technology and died in poverty, explaining Vanko's desire for revenge on the Stark family. Rival defense contractor Justin Hammer fakes Vanko's death and recruits him to perfect a line of armored suits to upstage Stark. Hammer, who equals Stark on narcissism and arrogance, wishes to not only defeat his rival in military contracts, but also wishes to absolutely destroy his legacy.

At what he believes is his final birthday party, Stark gets drunk while using the Iron Man armor, forcing his friend, U.S. Air Force Lieutenant Colonel James Rhodes, to intervene. Rhodes dons Stark's Mark II armor and battles Stark. The battle ends when the combatants both fire repulsor beams at each other, creating a huge explosion. After fighting with Stark, Rhodes delivers the armor to the U.S. military. Nick Fury, S.H.I.E.L.D.'s director, approaches Stark, revealing Rushman as undercover agent Natasha Romanoff and that Howard Stark was a S.H.I.E.L.D. founder whom Fury knew personally. Fury gives him some of his father's old material; a hidden message in the diorama of the 1974 Stark Expo proves to be a diagram of the structure of a new element. With the aid of his computer J.A.R.V.I.S., Stark synthesizes it. Vanko reveals to Stark that he is still alive and seeking revenge so Stark uses the untested element, ending his palladium dependency.

At the Expo, Hammer unveils Vanko's armored drones, led by Rhodes in a heavily weaponized version of the Mark II armor. Stark arrives in his new armor to warn Rhodes, but Vanko seizes control of both the drones and Rhodes' armor and attacks Iron Man. Hammer is arrested while Romanoff and Stark's bodyguard Happy Hogan attempt to capture Vanko. He escapes, but Romanoff returns control of the Mark II armor to Rhodes.

After defeating his drones Stark and Rhodes confront Vanko himself, now in a new and powerful suit of armor. Neither can match Vanko, but Vanko is ultimately defeated when they fire repulsor rays at each other, causing yet another huge explosion. With his suit too damaged to continue the fight Vanko activates his suit's self-destruct mechanism, along with that of his drones, apparently killing himself in the process. Stark saves Potts from the exploding drones' remains. Potts quits as CEO, and she and Stark kiss.

At a debriefing, while news footage of a rampaging Hulk plays, Fury informs Stark that while Iron Man is a suitable candidate for the "Avengers Initiative", he himself is not. Stark agrees to serve as a consultant if Senator Stern acts as presenter at a ceremony planned for awarding Stark and Rhodes with medals for bravery, which Stern reluctantly does.

In a post-credits scene, S.H.I.E.L.D. Agent Coulson reports the discovery of a large hammer at the bottom of a crater in a desert in New Mexico.

Iron Man 2 received generally positive reviews from critics. On Rotten Tomatoes, The film has a score of 73% based on 297 reviews with an average score of 6.49/10.

Retrieved from "https://movies.fandom.com/wiki/Iron_Man_2?oldid=245273"
Community content is available under CC-BY-SA unless otherwise noted.