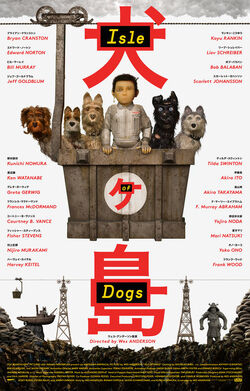 A US–German co-production, Isle of Dogs was produced by Indian Paintbrush and Anderson's own production company, American Empirical Pictures, in association with Studio Babelsberg. The film opened the 68th Berlin International Film Festival, where Anderson was awarded the Silver Bear for Best Director. It was given a limited release in the United States on March 23, 2018, by Fox Searchlight Pictures, and went on wide release on April 13. It has grossed over $64 million worldwide, and received praise for its animation, story, and deadpan humor. A manga adaptation of the film by Minetarō Mochizuki was published in 2018, beginning with the May 24 issue of Weekly Morning.

In a dystopian near-future Japan, an influenza virus spreads throughout the canine population, with a risk of crossing to humans. The 6-term authoritarian mayor of Megasaki City, Kenji Kobayashi, signs a decree banishing all dogs to Trash Island, despite a scientist named Professor Watanabe insisting he is close to finding a cure for the dog flu. The first to be exiled is Spots, who belonged to Atari Kobayashi, the orphaned nephew and ward of the mayor.

Six months later, Atari steals a plane and flies to Trash Island to search for Spots. After crash-landing, Atari is rescued by a pack of dogs led by a seemingly black dog named Chief, who is a former stray. The pack decides to help Atari locate Spots, although Chief refuses to join because of his inability to fraternize with humans. Together, they fend off a rescue team Kobayashi sends to retrieve Atari with a robot dog. Kobayashi claims Atari was kidnapped by the dogs and vows to kill them as punishment. At the insistence of a female purebreed named Nutmeg, Chief reluctantly decides to accompany the group on their search. They seek advice from two sage dogs, Jupiter and Oracle, who warn them of the existence of an isolated tribe of dogs rumored to be cannibals. Meanwhile, Professor Watanabe finds a cure and shows the results to Kobayashi, who still refuses to lift the dog ban. The professor is put on house arrest for criticizing Kobayashi and is then killed by poisoned wasabi in sushi. An American exchange student, Tracy Walker, suspects a conspiracy and begins to investigate.

During the journey, Atari and Chief are separated from the others. Atari gives Chief a bath, which reveals that his coat is actually white. Noticing the similarity between Chief and Spots, Atari realizes they must be of the same extremely rare breed. Chief remembers being part of a litter of which all but one died. He bonds with Atari as they continue their journey. They rejoin the group, but are ambushed by Kobayashi's men. Spots arrives with the cannibal tribe, and they fend off the assailants together, causing Kobayashi to declare Atari to be dead. Spots confirms that Chief is his brother, and reveals that he was rescued by the tribe, who were not actually cannibals, became their leader, and mated with a female dog, Peppermint. Because of these circumstances, he asks to transfer his protection duties for Atari to Chief, which is granted.

An owl brings word that Kobayashi plans to order the extermination of all dogs on Trash Island and replaced them with the robot dogs. Atari and the dogs prepare their journey to the mainland. Tracy confronts Watanabe's former colleague Yoko Ono, who confirms Tracy's suspicions and gives her the last remaining vial of the cure. At his re-election ceremony, Kobayashi prepares to give the order, but Tracy presents her evidence of his corruption. However, Kobayashi dismisses Tracy's evidence and orders her expulsion from Japan and deportation back to the United States. Chief, Atari and the dogs soon arrive, and confirm the cure works. Atari then presents a haiku, dedicated to Kobayashi, that signifies the sympathy that previously existed between dogs and humans. Kobayashi has a change of heart and revokes the decree, but his right-hand man, Major Domo, insists on triggering the extermination. A fight ensues with Kobayashi and Domo in which the "execute" button is pressed, but the poison backfires on the captors thanks to the help of a hacker from Tracy's high school.

During the fight, Atari and Spots are gravely injured by the robot dog. Atari's remaining kidney fails, but Kobayashi, admitting his mistakes, donates one of his own to save him. By law, mayorship of the city falls to Atari, and he decrees that dogs are allowed to reintegrate into society. Kobayashi along with Major Domo and their political allies are jailed for their corruption. Tracy and Atari become a couple, and Chief reunites with Nutmeg and takes up the role of bodyguard for Atari. Spots, who had been presumed dead, recovers and secretly raises his litter with Peppermint under the Kobayashi manor.

In October 2015, Anderson, who had previously directed the animated film Fantastic Mr. Fox, announced he would be returning to the genre with "a film about dogs" starring Edward Norton, Bryan Cranston and Bob Balaban. Anderson has said that he was inspired by seeing a road sign for the Isle of Dogs in England while Fantastic Mr. Fox was in development. Anderson said that the film was strongly influenced by the films of Akira Kurosawa, as well as the stop-motion animated holiday specials made by Rankin/Bass Productions.

Production began in October 2016 at the 3 Mills Studios in East London.

The animation department included a number of people who had worked on Fantastic Mr. Fox.

On December 23, 2016, Fox Searchlight Pictures acquired worldwide distribution rights to the film, with plans for a 2018 release. A trailer was released on September 21, 2017.

The film premiered as the opening film of the 68th Berlin International Film Festival on February 15, 2018, and had its North American premiere as the closing film of the SXSW Film Festival in Austin, Texas, on March 17, 2018. Isle of Dogs began a limited release in the U.S. on March 23, 2018. It was released nationwide in the United States on April 13, 2018.

Isle of Dogs has grossed $32 million in the United States and Canada, and $32.1 million in other territories, for a worldwide total of $64.1 million.

In its first weekend of limited release, the film made $1.57 million from 27 theaters (an average of $58,148 per venue). This is the second-highest screen average of 2018 thus far, behind Eighth Grade. 60 per cent of its audience was under the age of 30. In its second weekend the film made $2.8 million from 165 theaters (an increase of 74 per cent), finishing 11th. The film entered the top 10 in its third weekend, making $4.6 million from 554 theaters. The film expanded to 1,939 theaters the following week and made $5 million, finishing 7th at the box office.

On review aggregation website Rotten Tomatoes, the film holds an approval rating of 90% based on 285 reviews, and an average rating of 8/10. The website's critical consensus reads, "The beautifully stop-motion animated Isle of Dogs finds Wes Anderson at his detail-oriented best while telling one of the director's most winsomely charming stories." On Metacritic, which assigns normalized ratings to reviews, the film has a weighted average score of 82 out of 100, based on 54 critics, indicating "universal acclaim." Audiences polled by CinemaScore gave the film an average grade of "A" on an A+ to F scale, while PostTrak reported filmgoers gave it an overall positive score of 88 per cent.

Richard Roeper of the Chicago Sun-Times gave the film 3.5 out of 4 stars, praising it for taking risks, and saying: "It’s smart and different and sometimes deliberately odd and really funny — rarely in a laugh-out-loud way, more in a smile-and-nod-I-get-the-joke kind of way." Exclaim! gave the film 7 out of 10, saying it "has all the hallmarks of another Wes Anderson classic."

Some critics have argued that the film is an example of racial stereotyping and cultural appropriation, and that one of its characters aligns with the trope of the "white savior". The Japanese characters speak unsubtitled Japanese, with their dialogue instead being translated by an interpreter or a machine. Justin Chang of the Los Angeles Times wrote "It's in the director's handling of the story's human factor that his sensitivity falters, and the weakness for racial stereotyping that has sometimes marred his work comes to the fore... Much of the Japanese dialogue has been pared down to simple statements that non-speakers can figure out based on context and facial expressions". Angie Han, writing in Mashable, calls the American exchange student character Tracy a "classic example of the 'white savior' archetype–the well-meaning white hero who arrives in a foreign land and saves its people from themselves".

While this critique has created some furore on the film's release, Chang has said that his review had been taken out of context and turned into a "battle cry" on Twitter, adding, "I wasn't offended; nor was I looking to be offended". Another Japanese-American perspective was provided by Emily Yoshida, writing in New York magazine, that these concerns had been "seen before in debates about Asian culture as reflected by Western culture — perspectives can vary wildly between Asian-Americans and immigrated Asians, and what feels like tribute to some feels like opportunism to others".

Writing for BuzzFeed, Alison Willmore found "no overt malicious intent to Isle of Dogs' cultural tourism, but it's marked by a hodgepodge of references that an American like Anderson might cough up if pressed to free associate about Japan – taiko drummers, anime, Hokusai, sumo, kabuki, haiku, cherry blossoms, and a mushroom cloud (!). [...] This all has more to do with the... insides of Anderson's brain than it does any actual place. It's Japan purely as an aesthetic – and another piece of art that treats the East not as a living, breathing half of the planet but as a mirror for the Western imagination". She continued, "in the wake of Isle of Dogs' opening weekend, there were multiple headlines wondering whether the film was an act of appropriation or homage. But the question is rhetorical – the two aren't mutually exclusive, and the former is not automatically off the table just because the creator's intent was the latter".

Conversely, Moeko Fujii wrote a favorable review for The New Yorker, complimenting the film's depiction of the Japanese and their culture, as well as pointing out that language is the key theme of the movie. Fujii wrote,

Anderson’s decision not to subtitle the Japanese speakers struck me as a carefully considered artistic choice. Isle of Dogs is profoundly interested in the humor and fallibility of translation... This is the beating heart of the film: there is no such thing as “true” translation. Everything is interpreted. Translation is malleable and implicated, always, by systems of power... [the film] shows the seams of translation, and demarcates a space that is accessible—and funny—only to Japanese viewers.

Fujii also deconstructed the criticisms of the character of Tracy Walker being a "white savior," and how this relates to the film's language theme, writing,

At a climactic moment, the movie rejects the notion of universal legibility, placing the onus of interpretation solely upon the American audience... This is a sly subversion, in which the Japanese evince an agency independent of foreign validation. Indeed, to say that the scene dehumanizes the Japanese is to assume the primacy of an English-speaking audience. Such logic replicates the very tyranny of language that Isle of Dogs attempts to erode.

The film's score was composed by Alexandre Desplat, who had previously worked with Anderson on Fantastic Mr. Fox, Moonrise Kingdom, and The Grand Budapest Hotel. The soundtrack also features various original and selected songs from a variety of musicians, mainly from Japan. Some songs had origins in classic Japanese cinema such as the Akira Kurosawa films Drunken Angel (1948) and Seven Samurai (1954). The soundtrack comprises 22 tracks in total, 15 of which were composed by Desplat.

All tracks written and performed by Alexandre Desplat, except where noted.

Retrieved from "https://movies.fandom.com/wiki/Isle_of_Dogs?oldid=153850"
Community content is available under CC-BY-SA unless otherwise noted.