Start a Wiki
It Chapter Two 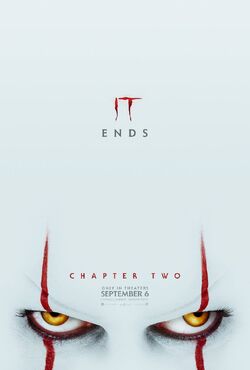 It Chapter Two is a 2019 American supernatural horror film directed by Andy Muschietti and written by Gary Dauberman. A sequel to the 2017 film It, it is intended to be the second film in a planned two-part film duology based on the 1986 novel of the same name by Stephen King. The film stars James McAvoy, Jessica Chastain, Jay Ryan, Bill Hader, Isaiah Mustafa, James Ransone, and Andy Bean as the adult gang of Losers. Bill Skarsgård reprises his role as Pennywise the Dancing Clown, along with the child cast from the first film returning, including Jaeden Lieberher, Sophia Lillis, Jeremy Ray Taylor, Finn Wolfhard, Chosen Jacobs, Jack Dylan Grazer, Wyatt Oleff, and Jackson Robert Scott.

Produced by New Line Cinema, Vertigo Entertainment and Rideback, and distributed by Warner Bros. Pictures, the film was released on September 6, 2019

30 years after the events of the summer of 1989, the Losers' Club have grown up and moved away until a devastating phone call forces them to return to Derry, Maine when their prehistoric, shape-shifting nemesis IT returns. As the group fulfill their childhood promise to reunite and destroy IT once and for all, they are unaware the creature has returned stronger than ever and is awaiting their arrival, waiting to exact its wrathful vengeance on them.

On February 16, 2016, producer Roy Lee, in an interview with Collider, mentioned a second film, remarking that: "[Dauberman] wrote the most recent draft working with [Muschietti], so it's being envisioned as two movies." On July 19, 2017, Muschietti revealed that the plan is to get production underway for the sequel to It next spring, adding, "We'll probably have a script for the second part in January [2018]. Ideally, we would start prep in March. Part one is only about the kids. Part two is about these characters 30 years later as adults, with flashbacks to 1989 when they were kids." On July 21, 2017, Muschietti spoke of looking forward to having a dialogue in the second film that does not exist within the first, stating, "... it seems like we're going to do it. It's the second half, it's not a sequel. It's the second half and it's very connected to the first one." Muschietti confirmed that two cut scenes from the first film will hopefully be included in the second, one of which being the fire at the Black Spot from the book.

In September 2017, New Line Cinema announced that the sequel would be released on September 6, 2019, with Gary Dauberman and Jeffrey Jurgensen writing the script. Andy Muschietti was also expected to return to direct the sequel.

Principal photography on the film began on June 19, 2018, which is scheduled to wrap on October 20, 2018 at the Pinewood Toronto Studios and on locations in and around Port Hope and Toronto, Ontario.

It: Chapter Two was released on September 6, 2019 by Warner Bros. Pictures.

It: Chapter Two on IMDb

Retrieved from "https://movies.fandom.com/wiki/It_Chapter_Two?oldid=215047"
Community content is available under CC-BY-SA unless otherwise noted.