watch 00:59
The Loop (Movies)
Do you like this video?
It Comes at Night 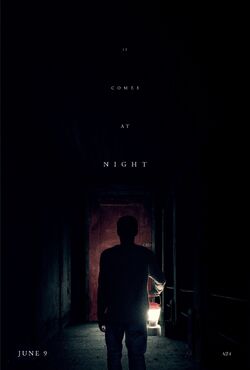 It Comes at Night is an American horror film directed by Trey Edward Shults. The film is also written by Shults. The cast of the film consists of Joel Edgerton, Christopher Abbott, Carmen Ejogo, Kelvin Harrison Jr., and Riley Keough.

“It Comes at Night,” a beautiful bummer of a horror movie written and directed by Trey Edward Shults, unfolds during the outbreak of an airborne illness that has decimated humanity and driven a family of four into the wilderness. The stakes are high, the losses severe. In the opening scene the family’s oldest member (played by David Pendleton), his body racked with disease, gets a teary, apologetic farewell from his daughter, Sarah (Carmen Ejogo), shortly before her husband, Paul (Joel Edgerton), wheels him outside and puts a bullet in his brain.

The killing is treated as an act of mercy, but Shults, the prodigiously talented 28-year-old filmmaker who made his debut with last year’s “Krisha,” refuses to let his characters off the hook that easily. The gas masks that Paul and Sarah are wearing early on make it difficult to tell them apart or understand their muffled speech, producing an alien-like effect that is both disorienting and revealing. In their desperation to survive, the movie seems to suggest, these people have already lost some crucial measure of their humanity.

Soon the masks come off and we get to know Paul, Sarah, and their 17-year-old son, Travis (Kelvin Harrison Jr.), as they go about the tough business of everyday survival. Along with their mutt, Stanley, they have taken refuge in a ramshackle house in a forest a long way from civilization. They keep the windows boarded up, the door locked and their firearms at the ready, lest they are discovered by outsiders who might want to raid their dwindling supply of water and rations — or, worse, who might be infected with the disease.

One night they are surprised by a non-hostile intruder named Will (Christopher Abbott), who claims to be seeking help for his wife, Kim (Riley Keough), and their toddler son, Andrew (Griffin Robert Faulkner), who are staying several miles away. Paul roughs Will up at first, trusting neither his intentions nor his story, but in Edgerton’s precisely judged performance, we see the decency and compassion flickering beneath his gruff authoritarian veneer. When it turns out that Will and his family have food to spare, Paul and Sarah realize the wisdom of pooling their resources and warily invite them to move in.

For a while, the mood lightens, as both parties adjust to the situation and enjoy the company and conversation of new friends. But the idyll cannot last; nor can it keep suspicion and anxiety from mounting in close quarters. The print of Pieter Bruegel the Elder’s “The Triumph of Death” hanging in Travis’ bedroom may offer a subliminal commentary on the horrors transpiring in the outside world, but they turn out to be no match for the demons within.

The stark, somber story bears echoes of everything from Cormac McCarthy’s “The Road” to George Romero’s splatterific zombie epics (“Night of the Living Dead” looms particularly large here), but what sets “It Comes at Night” apart from those post-apocalyptic forebears is its radical narrative economy. We learn almost nothing about where the characters are (the film was shot near Woodstock, N.Y.), the lives they left behind, or the grim circumstances that brought them to this woodland hideaway. As he did in “Krisha,” Shults avoids the conventional trap of exposition, relying instead on his striking command of the medium to evoke the inner life of a family under extraordinarily bleak circumstances.

But if “Krisha” was a harrowing psychodrama rendered in a splintery John Cassavetes syntax, “It Comes at Night” portrays a different kind of breakdown, one etched in dim light and implacable shadows. At times the cinematographer Drew Daniels seems to take his expressive cues from Caravaggio, bathing the actors in thick walls of blackness that are illuminated only by the glimmer of flashlights and lanterns. The occasional burst of eerie, hallucinatory imagery aside, every opportunity for cheap jolts and jump scares is scrupulously avoided.

The horror arises from a deeper, subtler place, which makes it all the harder to shake off. Shults is unusually attentive to group dynamics, particularly in the way he brings out the perspective of the teenage Travis, sensitively played by Harrison as a young man whose burgeoning sexual curiosity and rebellious streak are becoming ever harder for the house’s walls to contain.

There are moments in “It Comes at Night” — a scene of Travis and Will bonding while chopping wood, a conversation between Travis and Kim that feels both innocent and flirtatious — that seem prepared to send the movie spinning off in an unpredictable and melodramatic direction. But these possibilities are canceled out by a rigorously bleak and pessimistic ending that lives up to the fatalism of the movie’s premise, confirming your worst suspicions (as if confirmation were needed) about the evil that men and women can do in the name of survival.

The final moments of “It Comes at Night” go beyond the usual standards of horror-movie bleakness to achieve almost unwatchable cruelty — a powerful accomplishment that also feels, in this context, like a limitation. The world, we’re reminded, is an irredeemably awful place, and its people are scarcely better. It’s hard to argue with that conclusion, even if it ultimately feels more like a decree than an honest discovery.

Inspiration Behind the Film[edit | edit source]

It Comes At Night is low-key, and yet also suspenseful. The approach is so calm and quiet that you find yourself straining to hear every suggestive creak on the soundtrack or spotting an omen in the background. Is that a tree or a twisted human figure in the mid-distance as the protagonist drives through the woods? Was that tiny inconsistency in a stranger’s account of life before the crisis an honest slip or a crack in a sinister cover story?

Night is Shults' second feature film after last year's low-budget Krisha. Like Krisha, which was inspired by a cousin's fatal overdose, Night is an unsettling and personal family drama. He started writing it in 2014 after the death of his estranged father, who struggled with substance abuse and died of pancreatic cancer.

Reconnecting at his dad's deathbed after a decade of not speaking "was a very traumatic experience," Shults says. "He had so much regret about his life and everything he loved, and I was just trying to help him find peace."

Shults' grief manifested itself in the post-apocalyptic Night, whose central relationship is between father and son. Paul repeatedly reminds Travis that "you can't trust anyone but family" (advice the director's stepdad gave him growing up). The character also equips his family with gas masks and shotguns (a nod to one of Shults' relatives who's a doomsday prepper).

Retrieved from "https://movies.fandom.com/wiki/It_Comes_at_Night?oldid=234372"
Community content is available under CC-BY-SA unless otherwise noted.