Start a Wiki
watch 01:38
The Loop (Movies)
Do you like this video?
Jab Tak Hai Jaan 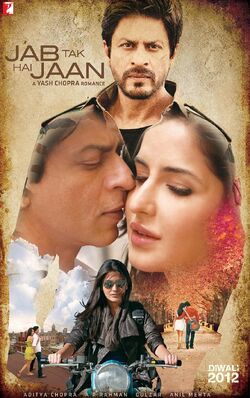 Jab Tak Hai Jaan is a 2012 Indian romance film directed by Yash Chopra and written and produced by Aditya Chopra under their production banner Yash Raj Films. The background score and soundtrack is composed by A.R. Rahman while the lyrics are penned by Gulzar. The film was released in the U.S. on November 13, 2012.

An ex-army man, leading a double life in London, must choose between his wife and muse.

Retrieved from "https://movies.fandom.com/wiki/Jab_Tak_Hai_Jaan?oldid=74722"
Community content is available under CC-BY-SA unless otherwise noted.