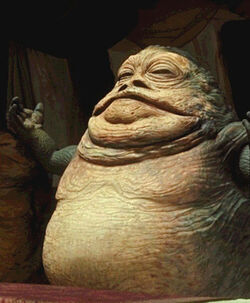 "Soon you will learn to appreciate me." Jabba the Hutt, in Star Wars Episode VI: Return of the Jedi.

Jabba the Hutt was the leader of an interstellar gang, which spanned a large region of the outer rim of the galaxy, in the universe of the Star Wars films.

Jabba was an abhorrent monster-like creature of heavy size, and sedentary life. His palace was located on the planet Tatooine, where Jabba was always surrounded by his fellow criminals of all kind, bodyguards, and a private cohort of lustful female creatures and entertainers. With his quite perverse demeanor and loud, cavernous laughter, Jabba wouldn't hesitate either torturing or executing any of his minions for mere merriment, and so a ferocious Rancor creature was kept in a pit below Jabba's sliding throne, for the job.

In Star Wars Episode V: The Empire Strikes Back, with much éclat Jabba the Hutt was featured as a magnificent.

Since the original Star Wars Episode IV: A New Hope, and along the original trilogy of Star Wars films, Jabba the Hutt was engaged for regaining the monetary losses, of an illegal cargo of Kessel spice, which had been dumped off the transport ship by the smuggler Han Solo (Harrison Ford), for the capture of Solo, which finally took place in Star Wars Episode V: The Empire Strikes Back, by the unplanned intervention of the powerful dark jedi Darth Vader (Joe Alaskey, acting; James Earl Jones, voice) and his Imperial forces, who handed the frozen prisoner to the bounty hunter Boba Fett (Jeremy Bulloch).

However, in Star Wars Episode VI: Return of the Jedi, Jabba the Hutt would lose frozen Solo, the most cherished ornament of Jabba's palace, when a rebel expedition irrupted, including Luke Skywalker (Mark Hamill), Lando Carlrissian (Billy Dee Williams), and Leia Organa (Carrie Fisher). After perversely abusing of Leia and failing to kill Luke and his friends, Jabba the Hutt was slain by the very same Leia, who managed to use her own metal leash for choking Jabba to death, whilst they were aboard Jabba's sail barge, over the desert of Tatooine.

Retrieved from "https://movies.fandom.com/wiki/Jabba_the_Hutt?oldid=228057"
Community content is available under CC-BY-SA unless otherwise noted.